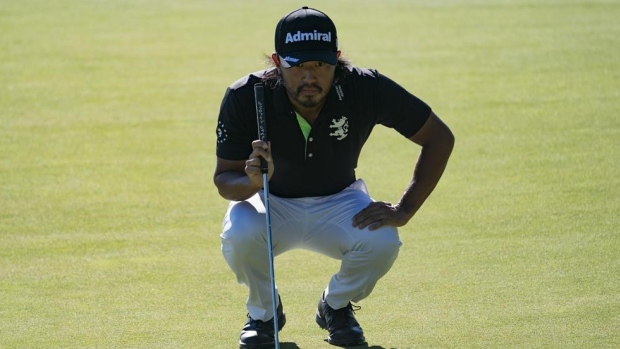 CROMWELL, Conn. (AP) — Phil Mickelson has had his share of success at TPC River Highlands, winning twice back when the PGA Tour event was still called the Greater Hartford Open.

The six-time U.S. Open runner-up needed a break after golf’s most grueling major to recover and spend time with his family. Now that his three children have grown, he’s back at the Travelers Championship trying to recapture the form that helped him to victory in 2001 and ’02.

“I skipped it for a long time because it was our kids' time to take a break in the summer,” Mickelson, who didn't play the event from 2004-18, said Thursday after shooting a 1-under 69 that left him six strokes behind the leaders. "Now they’re all out and back East and all over the place."

Satoshi Kodaira and Kramer Hickok each shot a 63 — the best in their careers on tour — to share the first-round lead. Talor Gooch was one stroke back, and five golfers were two strokes off the lead at minus 5.

Defending champion Dustin Johnson, who held the world No. 1 ranking until Jon Rahm passed him Sunday with his U.S. Open victory, stumbled at the start with a bogey on the second hole and then a double on No. 3. He finished with a pair of birdies to end the day at 70 at TPC River Highlands.

Mickelson sank a 64-foot putt for birdie on the par-4 ninth hole — his second-longest putt since the tour began tracking such things in 2004. The 51-year-old PGA Championship winner then made a 40-footer for par on No. 10.

“That long birdie putt, it’s just a bonus. You’re just trying to lag it up there close and it just felt in,” Mickelson said. “Same thing on 10, after making a mistake and having that long par putt. To make it was a nice little boost. Unfortunately, I didn’t advantage of that on the back nine.”

Mickelson was 1 over on the back.

“I let a good opportunity go after playing the front nine a couple under,” he said. “I was very close to hitting a lot of really good shots but they were just fractionally off.”

Gooch was a stroke behind Hickok after the morning rounds. Kodaira took the lead at 8 under in the afternoon after making the turn onto the front nine birdie-eagle-birdie, but a bogey on the par-3 eighth dropped him back into a tie with Hickok.

Kodaira's 63 matched his best score on the PGA Tour, from the second round of the 2018 RBC Heritage — his only victory. He was helped when he holed out from the fairway for an eagle on the 348-yard, par-4 second hole.

Hickok's top finish is a tie for eighth at the Bermuda Championship this year. He opened with a bogey on the par-4 10th hole, then rattled off eight birdies without dropping another stroke the rest of the way.

He missed a 5-foot birdie putt on the 13th hole, but then birdied five of the next seven holes and he played the last four of the day in three under.

“I really only hit one bad putt — on the par-5 13th. Other than that, I just felt like the holes looked awfully big today,” he said. “I made a lot of good putts today, and the greens says are rolling so good that just the holes look big.”

Hickok said he had his worst warmup session of the year in the morning, spraying the ball all over the range.

“So I really changed my strategy,” he said. “You just take a lot weight off your shoulders and you just go and simplify things ... just saying, ‘I don’t have that shot today. I’m not going to try and hit it.’ Just go with what you got.”