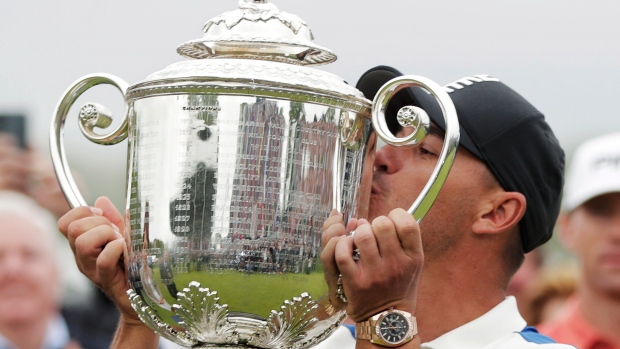 FARMINGDALE, N.Y. — His place in PGA Championship history finally secure, Brooks Koepka draped both arms around the top of the Wanamaker Trophy and let out a deep sigh.

Koepka lost all but one shot of his record seven-shot lead Sunday. Then he lost the brutal Long Island crowd, which began chants of "D.J.! D.J.!" as Koepka was on his way to a fourth straight bogey that allowed Dustin Johnson to pull within one shot.

"It's New York," Koepka said. "What do you expect when you're half-choking it away?"

He responded like a player capable of piling up major championships faster than anyone since Tiger Woods.

Motivated by the crowd turning on him, Koepka delivered the key shots over the closing stretch as Johnson faded with two straight bogeys. He closed with a 4-over 74 for a two-shot victory and joined Woods as the only back-to-back winners of the PGA Championship since it went to stroke play in 1958.

That gives him four of the last eight majors he played and makes him the first player to hold two back-to-back majors at the same time. He won his second straight U.S. Open last summer 60 miles down the road at Shinnecock Hills before a far less rowdy crowd.

When his 6-foot par putt fell on the last hole, Koepka thrust his muscular right arm in the air and hugged his caddie hard.

"Today was definitely the most satisfying out of all of them for how stressful that round was — how stressful D.J. made that," Koepka said. "I know for a fact that was the most excited I've ever been in my life there on 18."

Koepka said at the start of the week that majors are sometimes the easiest to win.

This one should have been.

And it didn't help that a raging wind that gusted up to 25 mph turned Bethpage Black into a beast, with Johnson (69) the only player out of the last 12 groups to shoot par or better. Koepka's 74 was the highest final round by a PGA champion since Vijay Singh (4-over 76) won in a playoff at Whistling Straits in 2004.

"I'm just glad I don't have to play any more holes," Koepka said. "That was a stressful round of golf. I'm glad to have this thing back in my hands."

Koepka appeared to wrap it up with a gap wedge from 156 yards to 2 feet on the 10th hole for a birdie, as Johnson made his first bogey of the round up ahead on the 11th. That restored the lead to six shots, and the coronation was on.

And then it all changed in a New York minute.

Four holes later, Koepka walked off the 15th tee with a one-shot lead. He looked over to his left to see Johnson facing a 7-foot par putt on the 16th hole — the most difficult hole at Bethpage Black on Sunday because it was into the wind — to stay within one shot. The groan of the crowd told him Johnson had missed.

"I felt like as long as I had the lead, I was fine," Koepka said. "As long as I put it in the fairway, I was going to be all right."

Koepka, who finished at 8-under 272, returned to No. 1 in the world with a performance that defines his dominance in golf's biggest events.

He was the first wire-to-wire winner in the PGA Championship since Hal Sutton at Riviera in 1983. It was his third straight year winning a major, a feat achieved by only seven others since the Masters began in 1934 — Woods, Phil Mickelson, Tom Watson, Jack Nicklaus, Arnold Palmer, Peter Thomson and Ralph Guldahl.

Winning four of his last eight majors is a stretch not seen since Woods won seven out of 11 when he captured the 2002 U.S. Open at Bethpage Black.

Next up is the U.S. Open at Pebble Beach, where Koepka already is the betting favourite as he defends his title for the second time. No one has won the U.S. Open three straight years since Willie Anderson in 1905.

No one will doubt whether Koepka is capable the way he is playing.

Johnson knew he was a long shot going into the final round — no one had ever lost a seven-shot lead in a major — and he still managed to make Koepka work for it.

He came undone with a shot he thought would be perfect — a 5-iron from 194 yards, dead into the wind on the 16. It one-hopped over the green into thick rough.

"Hit the shot I wanted to right at the flag," Johnson said. "I don't know how it flew 200 yards into the wind like that."

Johnson now has runner-up finishes in all four of the majors, the wrong kind of career Grand Slam.

It was more than anyone expected, especially when Koepka was six shots ahead with eight holes to play.

The crowd sensed a collapse and began chanting Johnson's nickname on the par-3 14th as Koepka went long and was headed for a fourth straight bogey.

Koepka is a 29-year-old Floridian with an imposing figure, power off the tee and out of the rough, no obvious weakness in his game and the kind of mental fortitude that majors require. He needed all of it to win this one.

Bethpage has a reputation for being over the top, and it irritated Harold Varner III, who shot 81 playing in the final group.

"I thought it was pretty weird how they were telling Brooks to choke," Varner said about the 14th hole. "That's not my cup of tea. I was pulling for him after that."

Koepka held it together at the most crucial moment. He piped his driver down the 15th fairway and two-putted for par. And he drilled another one into the 16th for another par. He kept it interesting to the end, three-putting the 17th as the lead went back to two shots, and pulling his driver on the 18th into fescue so thick it left him little choice but to lay up and scramble for par. Once his medium lob wedge settled 6 feet away, he could relax.

Woods won the Wanamaker Trophy in consecutive years twice, in 1999 and 2000, and again in 2006 and 2007. Koepka was starting to draw comparisons with Woods for the way he obliterated the competition, much like Woods in his 12-shot victory in the 1997 Masters and 15-shot victory in the 2000 U.S. Open at Pebble Beach.

In the end, just having his name on the heaviest championship trophy in golf was all that mattered.