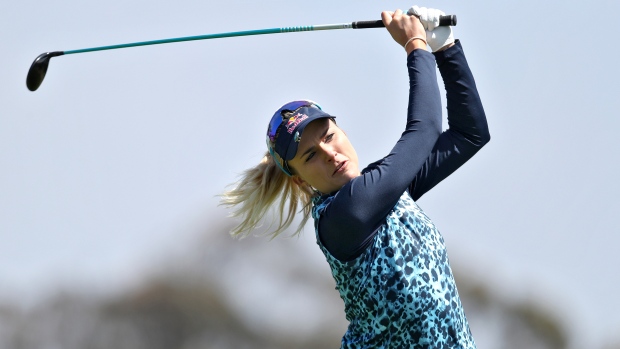 BELLEAIR, Fla. (AP) — Lexi Thompson birdied four of her last five holes Friday for a 6-under 64 to share the lead with Jennifer Kupcho going into the weekend of the Pelican Women's Championship.

One big prize was awarded when Pavarisa Yoktuan made a hole-in-one with an 8-iron on the 145-yard 12th hole and won a two-year lease for a Lamborghini.

Christina Kim felt like a winner, too, even though her work is not done. Kim missed out on Monday qualifying, received a late sponsor exemption and responded with rounds of 65-66 to sit just two shots off the lead.

That's a big deal for Kim because she is No. 98 in the Race to the CME Globe, and only the top 100 keep full cards for next year after this event. She would have to win — something Kim hasn't done in seven years — to move into the top 60 and advance to the CME Group Tour Championship next week.

For now, she was floating on air, no small task for a 37-year-old who referred to herself as an “Old Betty” who can “occasionally just whack it around and find the bottom of the cup every now and again.”

“Turns out I’m a bit of a control freak. So not being in control of my own destiny, not a big fan of that,” Kim said. “So once I knew I could control my own destiny I was able to just focus on getting the job done.”

Nothing is settled just yet for Kim or anyone else.

Kupcho, who has been a runner-up in each of the last three years on the LPGA Tour while still trying to capture her first title, ran off four birdies in a six-hole stretch around the turn for a 64 that set the target at 11-under 129.

“I don't know if I necessarily have it figured out,” said Kupcho, who had 12 birdies over her last 28 holes. “I'm just hitting really good iron shots and getting myself in good position on the greens.”

Thompson played in the afternoon and finished strong, her only blemish down the stretch a bogey on the par-4 eighth hole. She has not won since the ShopRite LPGA Classic more than two years ago and has slipped to No. 13 in the women's world ranking.

Nine players were separated by two shots at the halfway point at Pelican Golf Club.

“I think it’s going to be probably a shootout at the weekend,” Maguire said. “If that’s kind of the case, just trying to make as many birdies as you can and keep your foot down, see where it stands at the end of the weekend.”

Jin Young Ko, who has won four of her last seven starts on the LPGA, had a 66 to get back into the picture. The South Korean start was five shots behind.

Emma Talley overcame a bogey-bogey start for another 70 to make the cut on the number, important for her because she is No. 60 in the Race to the CME Globe. The top 60 get into the season finale next week, where everyone starts from scratch with $1.5 million at stake.

As for Yoktuan, that hole-in-one left her six shots behind and still a long shot to keep a full card next year because the Thai is at No. 158 in the standings. She also has a decision to make on whether there is any type of cash-in award on the Lamborghini.

That's not to suggest she's opposed to powerful car. She was driving a BMW until she crashed that recently. Her new mode of transportation? “A motorcycle,” she said.