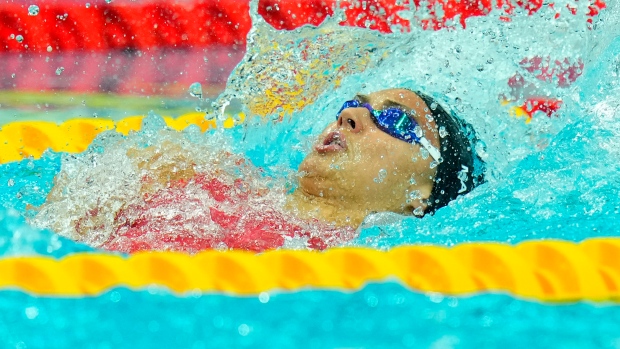 Masse, from LaSalle, Ont., finished in 58.40 seconds, .18 seconds behind winner Regan Smith of the United States.

"I’m really happy to stand on the podium," Masse said. "It’s always an incredible feeling to compete at world championships and fight for the podium with these girls — this is something I’m really proud of."

Masse got the fastest start in the field of eight swimmers and was beside Smith out of the turn.

Masse pressured Smith over the final 50 metres, but the American touched the wall just ahead of the two-time champion.

“It’s not necessarily the time I feel like I’m capable of, and I was a bit frustrated I had a poor touch, but I think after the crazy last couple of years I’m proud to be able to continue to fight to get on the podium," Masse said. "There are so many amazing backstrokers here and in the last couple of years. It’s been a great challenge and I’m continually motivated by them to push myself.”

It's the sixth career medal at the long-course world championships for Masse, tying her with Toronto's Penny Oleksiak for most by a Canadian.

Masse won the 100 backstroke in Budapest in 2017 and Gwangju, South Korea in 2019. She also won three bronze medals over the previous two championships.

Masse is coming off a strong performance at the short-course world championships in December, where she picked up four silver medals, including one in each of the backstroke distances (50m, 100m, 200m).

She won three medals at the 2020 Tokyo Olympics, including silver in the 100 and 200 backstroke. She was also part of Canada's bronze-winning 4x100 medley relay.

In other results, Taylor Ruck of Kelowna, B.C., advanced to Tuesday’s final of the women’s 200-metre freestyle, finishing sixth in the semifinals in one minute 56.80 seconds.

“I felt pretty good. I went faster than my goal time," Ruck said. "I’m very pleased with my swim, it’s the fastest I’ve been in a while, so I just keep steadily building up and getting faster."

Oleksiak was disqualified in the semifinals for a false start.

"I’ve never false started before in my life," she said. "Hopefully it never happens again."

In the morning preliminaries, Patrick Hussey of Beaconsfield, Que., finished 24th in the 200-metre butterfly. James Dergousoff of Christina Lake, B.C., was disqualified in the 50m breaststroke.

Canada's men get started Tuesday against Spain and the women take on Columbia on Wednesday.

This report by The Canadian Press was first published June 20, 2022.