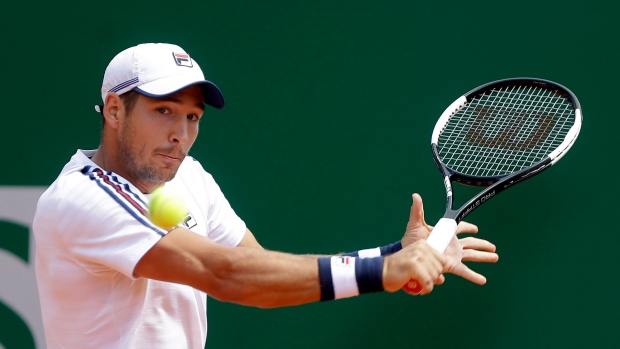 MONACO — Fabio Fognini ended Rafael Nadal's winning streak at the Monte Carlo Masters, stunning the defending champion 6-4, 6-2 Saturday to reach the final for the first time and hand Nadal his first defeat here since a loss to Novak Djokovic in the 2015 semifinals.

Fognini had beaten Nadal twice before on clay, and also once at the U.S. Open in five sets, but this was arguably the most impressive.

"I have the game to play against him," the 13th-seeded Fognini said. "I had nothing to lose."

He wasn't concerned if Nadal was out of form.

"That's not the question that I have to answer," Fognini said. "I just say that I played an incredible match."

Still, the second-ranked Nadal called it "one of my worst matches in 14 years" and the 32-year-old Spaniard said it was "difficult to find an explanation" for capitulating on his favoured clay-court surface.

Yet the defeat could have been even more humiliating for Nadal, who had not lost a set here by 6-0 since the 2005 final — which he went on to win for the first of his record 11 titles.

Fognini came so close to drubbing him in the second set. He served for the match at 5-0 and 40-0, but Nadal saved three match points, broke back and held.

"I was lucky to win the two games," said Nadal, who had not even lost a set here since conceding one in the second round against Britain's Kyle Edmund in 2017.

Serving again for the match at 5-2, Fognini hit a superb forehand down the line on his fourth match point. He next plays unseeded Serb Dusan Lajovic in their first-ever meeting, and one few would have predicted.

Least of all Fognini.

He trailed by a set and 4-1 down during his first-round match against Andrey Rublev.

"If you told me at the beginning of the week 'See you on Sunday (for the final),' I would laugh in your face," Fognini said.

The 48th-ranked Lajovic staged an impressive comeback of his own, meanwhile, rallying from 5-1 down to beat 10th-seeded Daniil Medvedev 7-5, 6-1.

That match was a suitable appetizer to the higher drama which followed.

Nadal had dropped his first three service games Friday in his quarterfinal against Guido Pella, and the early signs were not good this time.

His first game against Fognini lasted 12 minutes, with Nadal saving four break points before conceding the first of six breaks of serve in the match.

In his quarterfinal and semifinal combined, Nadal conceded 23 break-point chances.

But whether Fognini, who previously lost 11 times to Nadal overall, could capitalize seemed uncertain.

The 31-year-old Italian can lose his temper on court, and it got the better of him during the fourth game.

With heavy winds swirling around the court, Fognini's towel flew off his seat and landed on the clay during the first point. He complained to the umpire, perhaps to get the point replayed, and then angrily put the offending towel into his drinks box.

Nadal broke him to love to lead 3-1, and Fognini got a warning for unsportsmanlike conduct.

"The chair umpire made a bad call," Fognini said. "He gave me a warning for nothing."

Fognini irate, Nadal serving for a 4-1 lead — another comfortable Nadal route to the final looked on.

But Fognini broke back to 3-2 and then broke Nadal to love in the ninth game with some momentous shot-making.

Momentum was on Fognini's side, not to mention some luck.

Fognini raised both arms in apology, and then superbly put away a volley at full stretch on the next point to clinch the set.

He hit a delightful two-handed, backhand cross-court winner to break at the start of the second set.

Nadal is usually the undisputed crowd favourite on the French Riviera, but shouts of "Fabio, Fabio, Fabio" rang out at the Monte Carlo Country Club.

Many Italian fans likely made the short trip along the coast from nearby San Remo — where Fognini grew up.

"It's a big opportunity to them to come here and watch me play," Fognini said. "I don't know how many are coming tomorrow."

Still, he should have most of the support against Lajovic, who earlier won 10 straight games to lead 4-0 in the second set before Medvedev finally again held serve.

It could have been an all-Serb semifinal but Medvedev knocked out the top-ranked Djokovic in Friday's quarterfinals.

A new name will be on the trophy on Sunday.