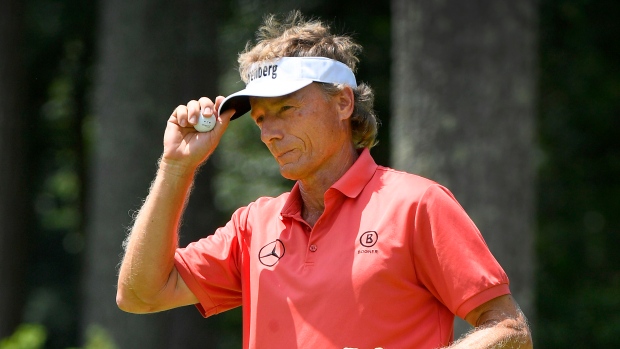 ENDICOTT, N.Y. (AP) — Bernhard Langer had a borrowed putter and a backup caddie Friday in the Dick's Sporting Goods Open. The 63-year-old German star also had such a good start he thought about shooting his age.

“It was a strange day,” Langer said. “I had to borrow a putter from Scott McCarron because mine broke yesterday and I was very fortunate to even find one that I could putt with."

Langer holed a 90-yard wedge shot for eagle on the par-5 eighth to get to 6 under, then had two birdies and three bogeys on the back nine for a 5-under 67, leaving him a stroke behind first-round leader Wes Short Jr. at En-Joie Golf Club.

“I was hoping to shoot my age today, but ran into some trouble on the back nine,” said Langer, the 2014 tournament winner. “I made three bogeys, which was actually four in the end. A couple of loose shots, a couple of very short missed putts here on 16, 17. Otherwise could have been much lower today, but I’ll take whatever it is.”

Langer decided late to play at En-Joie and skip the British Open in two weeks, but regular caddie Terry Holt had already made family plans, so friend and sports psychologist Fran Pirozzolo ended up on the bag.

“He’s got four World Series rings working with the New York Giants and he’s been a dear friend of mine for many years,” Langer said. “He grew up here, half-hour from here. He’s staying with his mother, and his brother lives here, so I said why not.”

Jim Furyk closed with a double bogey for a 72 in his tournament debut.

The U.S. Senior Open is next week at Omaha Country Club in Nebraska.