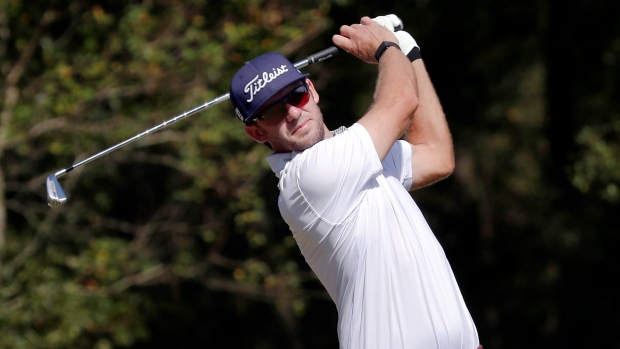 It was only after his par putt fell into the middle of the cup Sunday in the Houston Open that the 31-year-old Griffin struggle to contain so many emotions.

He describes his parents as hippies and his childhood as flush with fun and love, short on cash. His father, who bought him a starter set of clubs even though no one in the family ever played golf, died when Griffin was 12. A local pro in Virginia, Steve Prater, gave him an honorary membership when Griffin's father died and continues as a coach and mentor.

"This is going to be a week that I'll never, never forget — regardless what happens the rest of my career," Griffin said. "I feel very fortunate beyond words."

Locked in a tight race on the back nine, Griffin took the lead with a 35-foot birdie putt on the 16th hole, and then won with that 6-footer for par, which gave him a 3-under 69 and a one-shot victory over Mark Hubbard and Scott Harrington.

All three were on the Korn Ferry Tour last year. None had ever won on the PGA Tour.

The victory sends Griffin to the Masters and the PGA Championship, gives him a two-year exemption and forces him to come up with a fresh set of goals for the rest of the year. Except for statistics that take a season to complete, he ticked off most of them in Houston.

He played in a final group.

He wanted to play in two majors.

"I'll check whatever I have off there and reevaluate after this week," Griffin said.

Hubbard had the lead until he missed his only fairway of the final round on the par-5 15th, into the high grass of a hazard. He was able to chop out across the fairway into more thick grass, hit his third into a fairway bunker and missed an 8-foot par putt.

Harrington, who took 16 years to reach the PGA Tour and gave up a year to stay with his wife as she battled cancer, birdied the 15th with a two-putt from 10 feet, hit his tee shot to 3 feet for birdie on the 16th and was tied for the lead until a three-putt from 45 feet up the ridge on the 17th hole. Harrington missed a 15-foot birdie putt on the 18th and shot 67.

Hubbard had one last chance with a bold tee shot on the 18th, one of the toughest driving holes on the PGA Tour with water down the left side and a large bunker to the right. That set him up with a short iron to 25 feet, but his putt to at least force a playoff stayed left.

Hubbard closed with a 69.

Griffin played away from the water on the 18th, knowing he could handle any shot from there because the pin was to the left. His approach was just on the green, 60 feet away, and it rolled 6 feet by. When he made the winner, he dropped his putter and raised both arms before covering his head.

"Just a childhood dream. That's what we all play for," he said.

He thought about the Masters and Maui, where the year starts for PGA Tour winners, the FedEx Cup playoffs. It was a lot to take in.

"It's mind-boggling," he said. "Just didn't seem like it would ever happen, but at the same time, I believe in myself and I was extremely calm out there today. Just bizarre."

Griffin won on the Korn Ferry Tour last year and in 2017. He also won in Uruguay on the PGA Tour Latinoamerica in 2015 when he was trying to make his way to the big leagues.

His birdie on the 16th was his first since the eighth hole, and while Griffin missed birdie chances on both par 5s on the back nine, he also converted a 6-foot par save on the 14th hole and two-putted up a ridge on the 17th, making a 4-footer for par.

Griffin finished at 14-under 274 and moved to the top of the FedEx Cup as the PGA Tour heads to Asia for three weeks of big purses and limited fields with no cuts.

But first, a celebration that Griffin feels was a long time coming.

His phone showed 447 text messages, and Griffin planned to get to all of them. He looked again, it was at 457.

"We're moving up," he said. "Big thanks to everybody that supports me back home. Man, it's going to be fun celebrating with everybody."