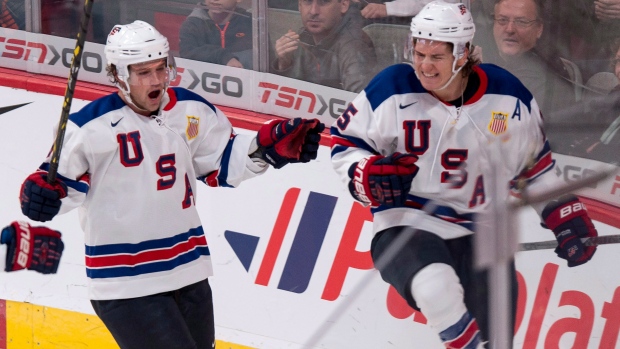 MONTREAL — Thatcher Demko only had to make 17 saves and Dylan Larkin had a goal and an assist as the United States blanked Slovakia 3-0 on Monday in round-robin play at the world junior hockey championship.

Sonny Milano opened the scoring for the Americans (3-0) late in the second period, with Larkin assisting on the goal.

The US held a large shot advantage through two periods of play, outshooting its counterparts 30-14.

Slovakia (1-2) goaltender Denis Godla kept it a one-goal game after 40 minutes of play by turning aside 19 shots in the second period alone.

"We had a lot of shots but nothing was really going in for the first two periods," said Milano. "It was good that we just kept going and a couple went in."

Larkin made it 2-0 for the United States 2:38 into the third and John Hayden added another in the final minute of regulation.

Larkin now has three goals and five points in three contests, which leads his team.

The United States went 0 for 1 on the power play while Slovakia failed to score on either if its chances with the man advantage.