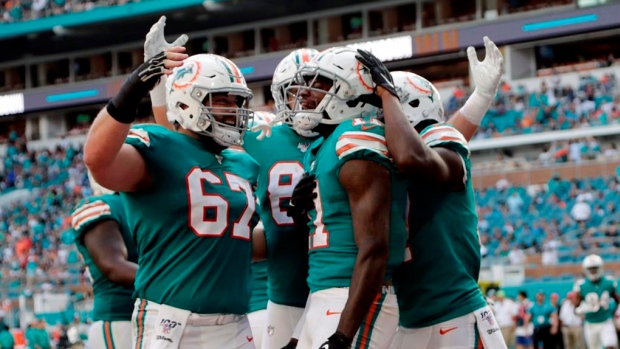 DAVIE, Fla. — DeVante Parker has become such an eye-catching receiver that even he is talking about it.

The Miami Dolphins wideout is a man of few words, but in his first four NFL seasons, attempts to let his play do the talking were a bit of a bust.

So was Parker. Miami’s 2015 first-round pick developed a reputation as an underachiever unable or unwilling to play through nagging injuries, and there was some head-scratching around the league in March when the Dolphins gave him a $10 million, two-year contract.

Their faith is finally paying off, and Parker has become a centerpiece in Miami’s rebuilding plan.

“He’s developing into the player that everybody thought he could be,” Dolphins wide receivers coach Karl Dorrell said.

Parker is on pace for his first 1,000-yard season, and the game Sunday was his best yet. He had his first two-touchdown game, with both scores coming thanks to leaping catches, and a career-high 159 yards on seven receptions as the Dolphins upset the Philadelphia Eagles.

“Every time I looked up he was coming down with the ball,” Miami offensive co-ordinator Chad O’Shea said, “which as a play-caller makes it easy to keep throwing it up to him.”

This year Parker has 854 yards receiving and six touchdowns, both career highs, and is four receptions shy of his career-best total of 57. Since Week 6 he leads the AFC in yards receiving.

Many catches have been highlight material, with the 6-foot-3 Parker often out-leaping a defensive back or two to snatch what Dolphins coach Brian Flores calls 50-50 balls.

“I have to catch the next one — that's all it is,” Parker said. “I know I have the ability to make plays and do whatever I can to help the team.”

For Parker, that’s a long speech. He has always been notoriously media-shy, and is quiet around the team, too.

“He doesn’t say much,” Dorrell said. “He grunts a lot. He smiles, though. He smiles quite a bit.”

Parker’s doing that more this season as he disproves doubters — not just those who dissed him, but critics who treated the 2019 Dolphins as laughingstocks.

“They got it wrong,” Parker said. “This team fights.”

Sparked by Parker, the Dolphins (3-9) have pulled off three upsets in the past five weeks. This Sunday they play the New York Jets, who are sure to make containing Parker a priority.

He has become the Dolphins’ best offensive player for Flores, Parker’s third head coach in Miami. Dorrell, as part of the new staff, said he offered Parker a clean slate last spring.

“He and I hit it off right from the start when we had our first meeting about, ‘I’m coaching you the player from this point forward and not looking backward,’” Dorrell said.

While Parker was often slowed by injuries during his first four seasons, he hasn’t missed a practice since the new staff took over.

Now 26, he has embraced acupuncture and other treatments to help stay healthy. He’s spending more time studying video and game plans. He earns praise from teammates as selfless.

And he’s blossoming into a star.

“I think it’s a little bit of everything. It’s health, it’s maturity, his experience,” Flores said. “When you’re 22 years old and you’re just coming in the league and it’s the first time you’ve ever had any money, some of those things — acupuncture, massages and hydration — kind of fall by the wayside. As you get older, you understand that those things are very important, and that everything you do counts.

“DeVante has worked extremely hard. Football is very important to him.”

“They gave me another chance. They didn’t have to sign me back, but they did,” Parker said.

He doesn’t say much, but in the debate about whether he’s a bust, Parker may get the last word.