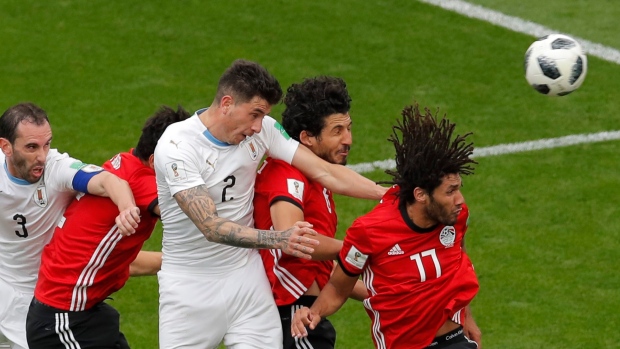 YEKATERINBURG, Russia — On a team that boasts one of the World Cup's most potent attacks, a defender lifted Uruguay to its first opening-match victory at the World Cup in 48 years.

Jose Gimenez headed in Carlos Sanchez's free kick in the 89th minute for a 1-0 victory over Egypt on Friday.

"Sometimes the ball will go to the back of the net, sometimes it won't," Uruguay coach Oscar Tabarez said. "I'm very proud of the team and the attitude they played with throughout the match."

Uruguay now has three points in Group A, but still trails Russia on goal difference after the host nation's 5-0 victory over Saudi Arabia on Thursday.

Egypt forward Mohamed Salah was on the bench for his country's first World Cup match since 1990 after injuring his shoulder while playing for Liverpool in last month's Champions League final. Salah was the Premier League's player of the season after scoring a league-leading 32 goals, with 44 in all competitions.

He left the Champions League final in tears on May 26 after he was injured during a collision with Real Madrid defender Sergio Ramos.

"He didn't play today because we didn't want to have any risk or danger," Egypt coach Hector Cuper said. "But I think he will be OK for the next match."

Uruguay strikers Luis Suarez and Edinson Cavani, the pair of players who make up that potent offence, missed their chances at the Yekaterinburg Arena. Suarez failed to beat Egypt goalkeeper Mohamed El Shennawy in two one-on-one situations and Cavani hit the post from a free kick two minutes from the end.

"We've tried to play in a very orderly fashion," Tabarez said. "I don't think some of the players played as well as they can."

Egypt, which had zero corner kicks in the match, has yet to win a World Cup game. It managed two draws at the 1990 tournament and lost its only match in 1934.

With its focus on defence, Egypt failed to capitalize on several mistakes from the Uruguay midfield.

"Mo Salah is an important player for us, that is without a doubt," Cuper said. "Perhaps if Mo had been on the pitch today the outcome could have been different, but we'll never know that."

Uruguay won but doubts about the team's attacking qualities remain.

Cavani and Suarez didn't receive the support they needed and at times dropped back to midfield as playmakers, not a role for a duo that has combined for 93 international goals.

With its traditional defensive tactics preferred by Cuper, Egypt badly needs Salah and his goals to succeed. Marwan Mohsen as a lone striker is not likely to be enough for the team at this year's tournament.

Expected to dominate Group A, Uruguay made its first step toward the next round.

Anything but a win against Saudi Arabia on Wednesday would be a surprise. With a victory, Uruguay could reach the next stage with a game in hand against host Russia on June 25.

To have any hopes of advancing, Egypt needs to avoid a loss against Russia on Tuesday and probably beat Saudi Arabia on June 25 in its final group game.

From 1970 until Friday, Uruguay had lost three games and drawn another three in its opening World Cup games. Tabarez called it "secondary statistics."

Tabarez is leading Uruguay into a fourth World Cup after a first trip in 1990. That was followed by appearances in 2010 and 2014.

Despite the winless streak, a team coached by Tabarez has always made it out of the group stage, including a semifinal appearance in South Africa eight years ago. In 1970, Uruguay also reached the semifinals.

"This is football, in our history of football," Tabarez said. "We've broken the spell."

Friday's game was played a day after the end of Ramadan, the holy month that requires Muslims to fast and refrain from drinking or eating from sunrise to sunset. Cuper didn't use it as an excuse.

"During this period, all the players observed Ramadan," Cuper said. "During the preparations (for the World Cup), we did everything possible to deal with the fasting. The Egyptian players are used to it. It's not an excuse for the result of today's match."