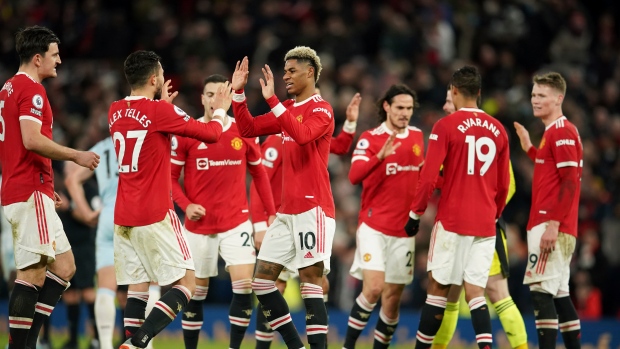 MANCHESTER, England (AP) — Marcus Rashford scored in the third and final minute of stoppage time to earn Manchester United a 1-0 win over West Ham that lifted the team above its opponent into fourth place in the Premier League on Saturday.

Rashford, on as a second-half substitute, tapped in a cross from fellow replacement Edinson Cavani in one of the few clear-cut chances created in a lackluster match at Old Trafford. The move also involved a third sub, Anthony Martial, as manager Ralf Rangnick's bold decision to finish the game with four forwards paid off.

“All were involved,” Rangnick said. “That makes it even more important.”

It completed a good week for United, which also won 3-1 at Brentford on Wednesday, as the league heads into a two-week winter break.

For Rashford, too, with the England forward scoring in back-to-back league games for the first time in a season that has been interrupted by injury and poor form.

“It is obviously an important goal and such late on is an amazing feeling," Rashford said. “We have to use that winning feeling.”

Cristiano Ronaldo, who overcame a neck problem to start, was kept on for the full match this time but didn't come close to scoring.

The Portugal forward was disgusted at being substituted midway through the second half of the game at Brentford and made his feelings clear to manager Ralf Rangnick.

There were just four shots on target in the whole match, with only one coming from West Ham.

“To be naïve like that and give away a goal in the last 20 seconds is devastating," said Declan Rice, who was imperious in West Ham's midfield.

“When they were pushing players forward, we are such a counterattacking side we still had the energy to go forward. It was a real kick in the teeth to concede that late."