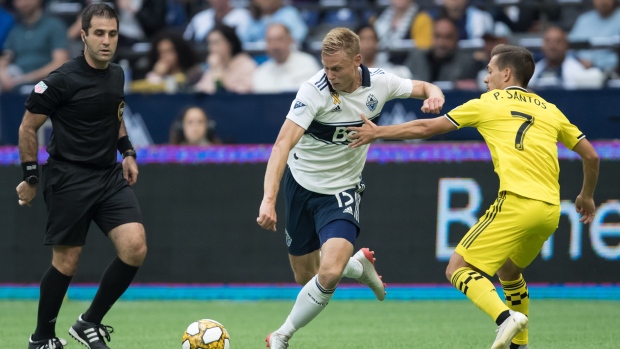 Montero scored on a header in the 94th minute to give the Vancouver Whitecaps a 1-1 draw with the Columbus Crew Saturday in Major League Soccer.

It was the second consecutive week the Colombian striker has played the late-game hero. Last Saturday, Montero scored in the 90th minute to give Vancouver a 2-1 win over the Houston Dynamo.

"That's soccer," said Montero, who substituted into the game in the 61st minute. "During my whole career I learned you need to keep working. I'm the type of forward that I need to go into the box. That's where I can show my best.

"The last two games there was only one play each game where I felt confident enough to score those goals."

The Whitecaps trailed 1-0 after Gyasi Zardes scored on a penalty kick in the 18th minute for Columbus. With the clock ticking away in extra time it looked like the Crew would win their first game ever at BC Place Stadium.

That changed when left back Ali Adnan sent a cross into the box that a leaping Montero was able to direct into the net. The goal was met by wild cheers from the crowd of 16,683 and disbelief from the Crew.

It was Montero's team-leading eighth goal of the season. Prior to the Houston game the 32-year-old had gone 12 matches without a goal.

"There have been highs and lows," Montero said about his season. "We need to continue believing in the process and knowing the Whitecaps next year have to come with a different mentality and different approach in the game."

The Whitecaps (7-15-10) were officially eliminated from the playoffs on Aug. 31.

"I'm not going to lie, it's a different type of energy," Montero said. "But at the same time if you don't prepare mentally for this type of game you set yourself up to get injured.

"I told my teammates . . . we have to be professional. We come every day and practice to win a game, not tie or lose."

Vancouver coach Marc Dos Santos said his team got what it deserved.

"Our team didn't deserve to lose today," he said. "We just got the tying goal late, that's all."

Columbus went ahead 1-0 after a defensive lapse gave Whitecaps' goalkeeper Zac MacMath little option but to trip up wide-open Crew forward Pedro Santos in the penalty area. Zardes calmly stroked home his 13th goal of the year while MacMath was shown a yellow card.

The Crew (9-15-8) have just one loss in their last 11 games (4-1-6) but the tie badly dented their playoffs hopes. The Crew entered the match six points behind the New England Revolution in the battle for the final playoff spot in the Eastern Conference.

"The season was on the line (with) 10 seconds to go, just put the ball in the stands," he said. "There are simple things that you have to do to win games, and we do the wrong things and it costs us the season.

"If we could see a game out this year we'd be in the playoffs."

The Whitecaps are becoming comfortable in the role of spoiler. The win last week also damaged Houston's playoff hopes.

"I believe no matter who the team is we are playing against, we have to have the mentality we are going to do the best to win," said Montero. "I'm sorry if we win and they are out of the playoffs. It's a game. That's part of life."

Vancouver had a chance to tie the match in the 56th minute. Forward Theo Blair took a shot from outside the box that clipped the foot of a Columbus defender then hit the post before goalkeeper Eloy Room was able to fall on the ball. Many in the crowd were left wondering how the ball stayed out of the net.

NOTES: Adnan earned his eighth yellow card and will be suspended for Vancouver's next match. … The Crew's only win in Vancouver was a 1-0 decision at Empire Field on July 6, 2011. Since then the Whitecaps are 5-0-3 against Columbus and 1-0-3 at BC Place. … So far this season 15 different Whitecaps have scored goals. … Defenders Jake Nerwinski (left ankle) and Erik Godoy (right calf) and goalkeeper Maxime Crepeau (right ankle) returned to the lineup.

This report by The Canadian Press was first published Sept. 21, 2019