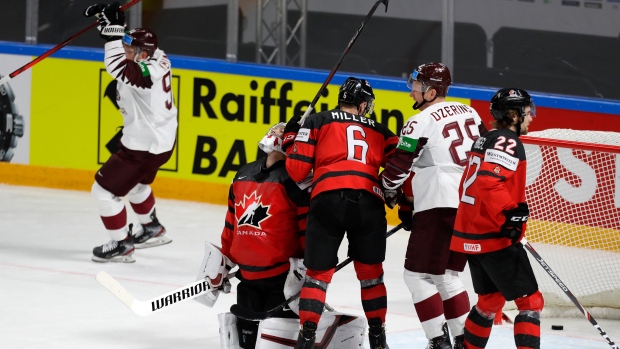 Canada came into the game with 11 wins and a tie all-time against Latvia, including an 11-0 victory in Riga at the 2006 world championship.

This time, however, Canada couldn't find a way to beat Kivlenieks, who plays for the NHL's Columbus Blue Jackets, despite having a sizable advantage in puck possession.

"We have to give Latvia a lot of credit," Canada forward Brandon Pirri said. "We knew they were going to play a good defensive game, and their goalie played really well.

"I think we generated a lot of chances, but this is first time on the larger ice for some of our guys and that can really make a difference."

Latvia opened the scoring on a power play with 1.5 seconds left in the first period when Miks Indrasis beat Canadian goaltender Darcy Kuemper between the pads.

Kuemper made 15 saves for Canada, which has now lost its last three opening games at the world championship.

"This was our first game we have played together as a group. We had no exhibition games, and I thought we played well given the circumstances," Canada coach Gerard Gallant said. "With a little bit of luck, we could have got a few bounces and it might have been a different game, but overall we will continue to get better as the tournament goes on."

Canada's next game is Sunday against the United States.

In other scores Friday, it was: Russia 4 Czech Republic 3; Germany 9 Italy 4; and Slovakia 5 Belarus 2.