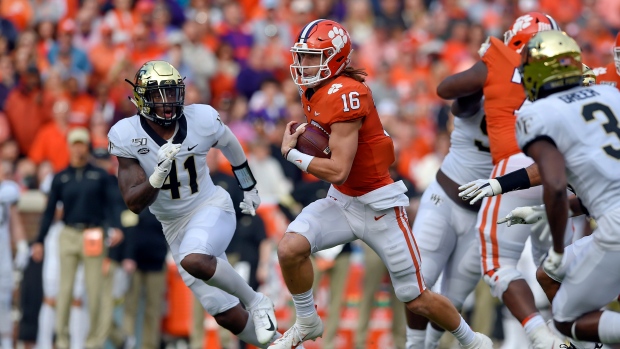 Lawrence and Higgins connected on a 14-yard scoring pass on Clemson's first drive and Etienne followed with a 14-yard run for a 14-0 lead five minutes into the game. The Tigers got it going again in the half's final minute with Lawrence finding Higgins between a pair of defenders on another 14-yard scoring pass with 42 seconds left. Cornerback A.J. Terrell got an interception with 20 seconds left -- the second pick thrown by Wake Forest passer Jamie Newman -- and Lawrence threw a perfect strike to Higgins from 30 yards out as Clemson led 31-3 at the break.

This one figured to have more at stake as surprising Wake Forest had only one ACC loss heading into November and looked for an upset at Clemson to gain the ACC Atlantic's spot in the league championship game. But he Demon Deacons were beaten at Virginia Tech, 36-17 last week and Clemson clinched its fifth consecutive division crown with a 55-10 win at North Carolina State a week ago.

Wake Forest lost two straight games for the first time this season. The Demon Deacons, who were averaging 487 yards a game, managed just 105 yards in this one.

Etienne had 121 yards, his sixth consecutive game with 100 or more yards and his seventh this season.

Clemson reached 11-0 for the third time in five seasons. It can finish a second straight undefeated regular season when it faces state rival South Carolina on Nov. 30.

Wake Forest: The Demon Deacons could get little going. They had just 54 yards in the opening quarter as the Tigers quickly figured out how to handle Wake Forest's exaggerated mesh-point handoff schemes. The Demon Deacons can still finish high in the ACC by handling business in their final two league games against Duke and Syracuse, who came into this week a combined 7-11.

Clemson: The Tigers certainly proved they had no equal in the ACC regular season. The defending national champions also look like they're rounding into shape for whichever College Football Playoff opponent they draw. They've scored at 45 points in six straight games and have not allowed an opponent to score more than 14 points in that stretch.

Clemson has won and slid before this season. But can't imagine the Tigers fall from the No. 3 spot they hold in both the AP rankings and the College Football Playoff poll.

Wake Forest concludes its home season against Duke on Saturday.

Clemson takes a week off before closing the regular season at state rival South Carolina on Nov. 30.