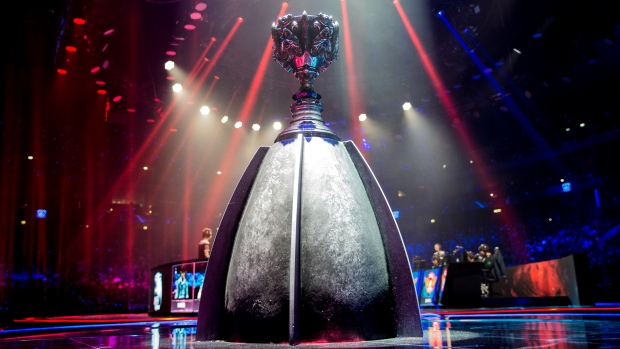 The League of Legends World Championship will return to North America in 2022 with a continental tour that includes a stop in Toronto, Riot Games announced on Sunday.

Worlds is the height of LoL Esports competition and sees the top teams from 12 regions compete for the world champion title.

Twenty-four teams from Riot’s 12 professional leagues will participate in the month-long tournament to determine the best in the world.

The play-ins will take place in Mexico City, groups and quarterfinals in New York City, the semifinals will be held in Toronto and the finals will be staged in San Francisco.

The announcement was made Sunday at the Chase Center, the venue that will host the finals, prior to an NBA game between the Golden State Warriors and the Toronto Raptors.

The semifinals will be held at Scotiabank Arena, the home of the Raptors and the NHL’s Toronto Maple Leafs.

“We look forward to welcoming League Of Legends once again, this time for their 2022 World Championship at Scotiabank Arena," said ​Melissa Bubb-Clarke, Senior Vice President, Music & Live Events at MLSE in a statement. "The esports community is growing exponentially in Canada and our fans will be excited to have the opportunity to attend and watch the best of the best of LoL.”

“Last time at the Worlds in North America, back in 2016, EDG was not able to make out of quarterfinals,” Edward Gaming president David Ng said in a release. “Now, we are looking forward to coming back as the defending champion and going to multi-cities across North America that we've never been to before. EDG will work hard with LPL and prepare for the 2022 World Championship.”

The other venues that will see action during the Worlds are LoL Esports’ Liga Latinoamerica competition arena in Mexico City and the Hulu Theater at Madison Square Garden in New York City.

“The momentum behind League of Legends Esports has only continued to grow since the last titime we hosted Worlds in the U.S. in 2016,” Global Head of LoL Esports Naz Aletahan said in a release.  “We're thrilled to bring the full scale of our global sport back to North America, and, COVID permitting, welcome fans into the stands across three countries and four different cities. Worlds is the showcase of the greatest of our sport, and we look forward to celebrating that with our fans in North America and across the world.”