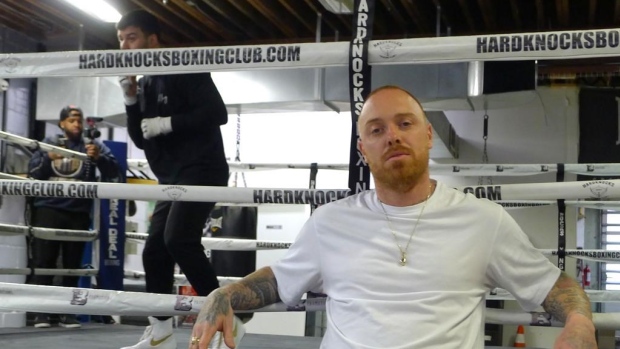 TORONTO — After running everything from a dog boutique to a tattoo parlour and restaurant, Lee Baxter has handled more than his share of business challenges.

But boxing is where his heart is.

Baxter, a boxing manager and promoter who owns the Hardknocks Boxing Club in downtown Toronto, is looking to put the sport back in the spotlight in Hogtown. A new broadcast partnership with DAZN has given him the platform to make good on that goal.

Baxter sees the stylish Acosta as a star in the making.

The five-foot-nine Acosta, who fights at 126 pounds, looks younger than his 23 years — and more like a model than a boxer. He is also marketable given he speaks excellent English, thanks to four years living in San Diego and a lot of practice.

"I practised interviews like this one," the slender fighter said with a chuckle.

Acosta started boxing at 10 or 11, compiling an amateur record of 117-7, and turned pro at 17. He has fought at super-bantamweight, one weight class below featherweight, so has no issue making 126 pounds.

But it takes discipline. Asked if a slice of pizza ever passes his lips, he smiles.

Baxter has put on 31 boxing cards already despite being stymied in recent months by the pandemic and related tight Ontario restrictions on crowds. After an enforced hiatus, he held local shows in December and March as well as a card in Detroit in April.

With the boxing commission run by the provincial government, there was no wiggle room during COVID. Even shows without fans weren't permitted.

"We lost a lot of momentum," he said.

So Baxter, who manages some 20-plus boxers, looked elsewhere. Several of his fighters competed at shows in Colombia and Mexico. And he was on the verge of staging a card in the Dominican Republic before things eased in Ontario.

Baxter sold an investment condo during the pandemic to help keep everything going.

His other enterprises include FY (Forever Young) Ink Tattoos. A restaurant, Gangster Burgers, is now closed.

The 38-year-old Baxter's entree into boxing was somewhat fortuitous.

He was given a pair of tickets for a 2010 show at the Hershey Centre, now known as the Paramount Fine Foods Centre, in suburban Mississauga.

He had just taken over the tattoo shop — which he bought the same year essentially on a whim/dare that he couldn't make a go of it — and was looking for help in publicizing it. So he invited Samuel Vargas, a Colombian-Canadian boxer on the card, to get inked.

The two became friends and Baxter eventually offered to manage the fighter. Given his lack of experience in the sport, it took a while to win Vargas over on the business front.

"But I had a plan," Baxter said. "I was like 'You know what? if I can get to know this, I believe what I just saw in that stadium should be in Toronto on a much bigger magnitude. It might take 10 years to do it but I believe that if it's done right, Toronto will be able to host things like that.'"

He promoted his first boxing card in 2015.

"There were maybe 300 people there and I think 60 of them paid," Baxter recalled with a chuckle. "I probably lost a pile of money but I was like 'I did it. I did it.'"

He was a co-promoter, along with Floyd Mayweather and Montreal's Yvon Michel, of the Adonis Stevenson-Badou Jack title fight in May 2018 at Scotiabank Arena.

Baxter is very much a self-made man. A Toronto boy, he dropped out of high school but returned when his mother got cancer and asked that her son get his high school diploma.

Baxter did and his mom beat cancer.

His first business was the dog boutique. He and his then-partner had dogs and decided to turn it into a business, which did well until he decided to sell the space.

Baxter is visually a good fit with boxing, looking like he walked out of a Guy Ritchie movie. Tall and lean, with an easy smile and cropped hair, he smoothly works the room at his gym as boxers and their teams arrive for a pre-fight event.

The gym moved location late last year and isn't quite as gritty as the previous space. But it's still basic and functional, aimed at giving fighters what they need to train rather than interior design suggestions.

A boxing ring dominates the storefront space, with heavy bags hanging from the ceiling and a spartan weight room at the back. Frayed boxing posters line the walls, along with iconic photos of Muhammad Ali.

Vargas (31-8-2) is still part of Baxter's stable, although at 33 and an expectant father there may not be many fights left.

"I'll be back in there but I don't really have a time when," he said.

His bond with Baxter, whose girlfriend is also expecting, remains strong.

"He's a brilliant, brilliant businessman and entrepreneur," said Vargas, who has fought in Canada, Colombia, England, Mexico and the U.S. "We started this boxing thing 10 years ago. We stood right next to each through the ups and downs and we're here now. Look at us now. We have a brand new gym. There's steady boxing events in the downtown core of the city. All of these athletes are getting the spotlight now with DAZN … It's exciting, man."

Acosta is a young gun whom Baxter expects to go far.

Acosta's father cornered an opponent on a Baxter show four years ago. Bryan Acosta also came north and hit it off with Baxter, who took over when the contract with his existing promoter ran out.

"He believed in me," Bryan Acosta said of Baxter. "And I believe in him. We make a great team."

The fighter from Hermosillo, Mexico, won his Canadian debut in March with a unanimous decision over fellow Mexican Lamberto Macias.

Baxter also has high hopes for Irish super-lightweight Lee Reeves, who is in the co-main event Thursday.

After years of doing just about every job there is in a string of Toronto nightclubs (Fluid, Money, Red Square, Tonic, G Spot) Baxter considers himself a problem-solver.

"I learned a lot in nightclubs, a lot," he said

He knew working in nightclubs was not a viable future business plan. So he looked for something else that would challenge him.

That turned out to be the tattoo parlour.

"For the first year, it was a nightmare. I didn't know anything about tattoos," he said.

Twelve years later, the shop is still there. "It's a well-greased machine now," he says.

As for boxing, he says the secret of success for a promoter is the same as that for a fighter.

He cites the example of a matchmaker/manager flying in from Mexico for the card whose phone broke with a string of boxers to pick up at the airport. How to make contact?

Baxter unearthed the phone number for the manager's wife, guessing that she would be his first call once he found a phone and made contact so they could touch base.

Baxter expects to sign and showcase more fighters, thanks to the reach of the DAZN deal.

This report by The Canadian Press was first published May 4, 2022