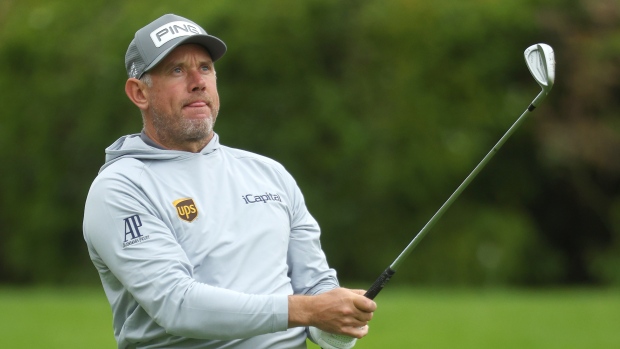 McKINNEY, Texas (AP) — Lee Westwood and Ian Poulter didn't want to talk about the PGA Tour's decision to deny releases to members who asked to play in the first of a series of Saudi-funded tournaments next month in England.

Tour loyalists were happy to weigh in at the Byron Nelson on Wednesday, the day before the Dallas-area event. Their theme: more power to anyone who wants to join Greg Norman's latest bid to create a lucrative rival league.

“Look, if you want to go, go,” said Justin Thomas, the eighth-ranked player in the world. “There’s been plenty of guys that have been advocates of it and have just talked it up all the time and they have been guys behind the scenes that are saying, ‘I’m going, I’m doing this.’

“And, like, my whole thing is, like, just go then,” Thomas said. “Stop going back and forth. Everybody’s entitled to do what they want.”

Westwood, who has confirmed seeking releases from the PGA and European tours, responded to a reporter by saying he knew what would be asked and didn't want to answer questions on the topic.

Poulter is among those identified by The Daily Telegraph as seeking releases. He hopped in a golf cart after his Nelson pro-am round and said he had to be somewhere.

The first LIV Golf Invitational is scheduled for June 9-11 at Centurion Golf Club outside of London, with a 48-man field competing for a $20 million purse over 54 holes. The winner gets $4 million — to date the richest prize in golf — and last place gets $120,000.

While PGA Tour guidelines allow three conflicting event releases a year for overseas tournaments, it looked at the LIV debut differently as the the first of eight such $20 million events (five of them scheduled for the U.S.) with a clear indication it is the start of a new league.

Westwood isn't the only European tour player seeking a release. The European tour said in a statement it is “evaluating each request on a case-by-case basis and will correspond our decision with each individual member in due course.”

Norman, meanwhile, held a media day at Centurion and said he was prepared to support players if they need help.

“We are going to back our players, we are going to be there for them, for whatever it is,” Norman said, according to The Daily Telegraph. “I’ve told the players, ‘It’s your choice. If you want to stay exclusively with the PGA Tour, happy days, go for it.’

“But I’ve also told the players, ‘We’ve got your back.’ Simple. We will defend them, we will reimburse them and we will represent them.”

The PGA Tour informed players seeking releases of Commissioner Jay Monahan's decision Tuesday, then notified all players of the decision in a short memo, which was obtained by The Associated Press.

“I think Jay’s made it very clear from the start of what would happen,” Thomas said. “I think a lot of people are probably like, ‘I can’t believe you did this,’ or, ‘Wow, you went through with it.’ But this is what he said was going to happen all along.”

Will Zalatoris said he's a member of the player advisory council, and said the group has had “a lot of talks” about the Saudi-backed league. He said the decision was the “perfect response.”

“If you want to do it, no one’s stopping you,” the 25-year-old Zalatoris said. “But what we have here is pretty good too, considering every week we’re playing for a pretty great purse on pretty great golf courses and considering the benefits that we have off the golf course on top of that. It’s pretty tough to beat.”

While the names of players who have signed up has not officially been released, Phil Mickelson said through his agent he has asked for a conflicting event release to the London event. The Daily Telegraph reported that Sergio Garcia and Martin Kaymer also are among those seeking releases.