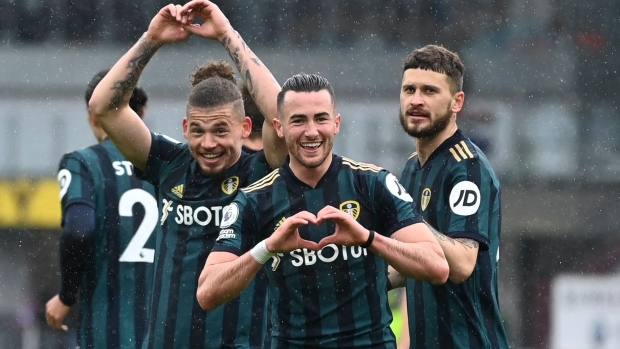 BURNLEY, England (AP) — Leeds extended Burnley's winless run at home to nine games with a 4-0 victory on Saturday that bolstered their bid for a top-10 finish in the English Premier League.

Substitute Rodrigo scored two late goals to give Leeds a four-point cushion over 11th-place Aston Villa, which plays at Crystal Palace on Sunday.

Mateusz Klich finished a counterattack by curling in a shot shortly before halftime, and Jack Harrison doubled the lead at the hour mark by getting a touch to flick Ezgjan Alioski’s low shot into the net.

Burney, which won 2-0 at Fulham on Monday to secure top-flight status for a sixth consecutive season, hasn't won at Turf Moor since a 3-2 victory against Aston Villa on Jan. 27.

Leeds, back in the Premier League this season after a 16-year absence, is at Southampton on Tuesday.