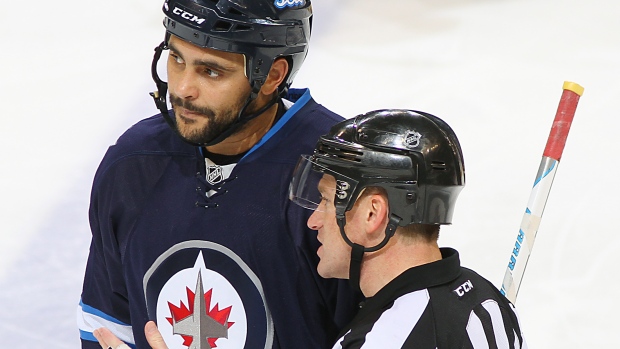 The Winnipeg Jets are in the thick of a playoff race and may lose its top scoring defenceman Dustin Byfuglien to suspension. In a game against the Rangers, Byfuglien delivered a vicious cross-check to the back of J.T. Miller's neck/head area.

After the game, Rangers head coach Alain Vigneault said the incident was "violent, deliberate...could have broken his neck. It was one of the most vicious cross-checks I've seen this year."

A suspension seems inevitable for Byfuglien, although historically it can be difficult to predict the length. It has been confirmed that Byfuglien will have a telephone hearing. As per Article 18.9 of the Collective Bargaining Agreement, this means that a suspension of five games or less is likely.

Apart from league discipline, the other issue to consider is whether Byfuglien's actions were a crime.

The principle of consent is really important when we talk about whether an incident on the ice is elevated to the crime of assault. In hockey, when you step on the ice you consent to some form of bodily contact and harm and the risk of injury that flows from that. The type of harm you consent to is contact that is part of the game (i.e., incidental contact). At law, this principle of consent is called voluntary assumption of risk.

However, a distinction should be made. Players are only consenting incidental contact (or contact that is part of the game like body checks). Players, though, are not consenting to acts that are so clearly outside the scope of what is acceptable in the game. When that happens, you start questioning if a crime has occurred. We did that with Todd Bertuzzi on Steve Moore, Marty McSorley on Donald Brashear and Alex Perezhogin on Garrett Stafford. And we are doing that with Byfuglien on Miller.

There is a reasonably good argument that Byfuglien's hit on Miller constitutes the crime of assault. The hit is not something players agree to when they step on the ice. Rather, Byfuglien's cross-check clearly falls outside the scope of incidental contact in the game of hockey.

Byfuglien got lucky on this one. Miller came back to play the game and it does not appear as though he was seriously injured. That same hit could have conceivably delivered far more severe damage. Had that happened, this would look a lot different for Byfuglien.

While this appears to be a crime, are we going to see criminal charges? Of course not. Miller did not sustain any apparent lasting injuries. Prosecutors need to prioritize criminal charges and this one will not make their list. Should Miller's symptoms get worse, then his recourse would be a civil claim (suing for money) against Byfuglien.

Ultimately, it's important to remember that a slab of ice does not magically insulate a player from criminal or civil liability. While the standard on the ice differs, there remains a standard.