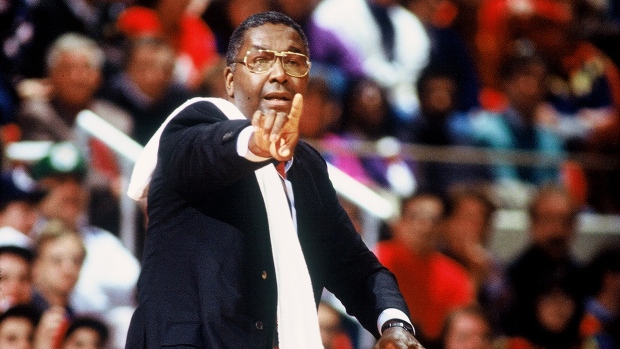 WASHINGTON — John Thompson, the imposing Hall of Famer who turned Georgetown into a “Hoya Paranoia” powerhouse and became the first Black coach to lead a team to the NCAA men’s basketball championship, has died. He was 78.

His death was announced in a family statement released by Georgetown on Monday. No details were disclosed.

“Our father was an inspiration to many and devoted his life to developing young people not simply on but, most importantly, off the basketball court. He is revered as a historic shepherd of the sport, dedicated to the welfare of his community above all else,” the statement said. “However, for us, his greatest legacy remains as a father, grandfather, uncle, and friend. More than a coach, he was our foundation. More than a legend, he was the voice in our ear everyday.”

One of the most celebrated and polarizing figures in his sport, Thompson took over a moribund Georgetown program in the 1970s and moulded it in his unique style into a perennial contender, culminating with a national championship team anchored by centre Patrick Ewing in 1984.

Georgetown reached two other title games with Thompson in charge and Ewing patrolling the paint, losing to Michael Jordan’s North Carolina team in 1982 and to Villanova in 1985.

At 6-foot-10, with an ever-present white towel slung over his shoulder, Thompson literally and figuratively towered over the Hoyas for decades, becoming a patriarch of sorts after he quit coaching in 1999.

One of his sons, John Thompson III, was hired as Georgetown’s coach in 2004. When the son was fired in 2017, the elder Thompson -- known affectionately as “Big John” or “Pops” to many -- was at the news conference announcing Ewing as the successor.

Along the way, Thompson said what he thought, shielded his players from the media and took positions that weren’t always popular. He never shied away from sensitive topics -- particularly the role of race in both sports and society -- and he once famously walked off the court before a game to protest an NCAA rule because he felt it hurt minority athletes.

“I’ll probably be remembered for all the things that kept me out of the Hall of Fame, ironically, more than for the things that got me into it,” Thompson said on the day he was elected to the Hall in 1999.

“He was one of a kind,” Syracuse coach Jim Boeheim, a fierce rival for many years in the Big East Conference, said Monday. “There aren’t that many. He brought a presence to the game that nobody does, has. He was a great coach, but he was also a role model for a lot of coaches-- white coaches and Black coaches.”

Employing a physical, defence-focused approach that frequently relied on a dominant centre -- Alonzo Mourning and Dikembe Mutombo were among his other pupils -- Thompson compiled a 596-239 record (.715 winning percentage). He had 26 players drafted by the NBA.

One of his honours -- his selection as coach of the U.S. team for the 1988 Olympics -- had a sour ending when the Americans had to settle for the bronze medal. It was a result so disappointing that Thompson put himself on a sort of self-imposed leave at Georgetown for a while, coaching practices and games but leaving many other duties to his assistants.

Off the court, Thompson was both a role model and a lightning rod. A stickler for academics, he kept a deflated basketball on his desk, a reminder to his players that a degree was a necessity because a career in basketball relied on a tenuous “nine pounds of air.”

The school boasted that 76 of 78 players who played four seasons under Thompson received their degrees.

He was a Black coach who recruited mostly Black players to a predominantly white Jesuit university in Washington, and Thompson never hesitated to speak out on behalf of his players.

One of the most dramatic moments in Georgetown history came on Jan. 14, 1989, when he walked off the court to a standing ovation before the tipoff of a home game against Boston College, demonstrating in a most public way his displeasure against NCAA Proposition 42.

The rule denied athletic scholarships to freshmen who didn’t meet certain requirements, and Thompson said it was biased against underprivileged students. Opposition from Thompson, and others, led the NCAA to modify the rule.

Thompson’s most daring move came that same year, when he summoned notorious drug kingpin Rayful Edmond III for a meeting in the coach’s office. Thompson warned Edmond to stop associating with Hoyas players and to leave them alone, using his respect in the Black community to become one of the few people to stare down Edmond and not face a reprisal.

Though aware of his influence, Thompson did not take pride in becoming the first Black coach to take a team to the Final Four, and he let a room full of reporters know it when asked his feelings on the subject at a news conference in 1982.

“I resent the hell out of that question if it implies I am the first Black coach competent enough to take a team to the Final Four,” Thompson said. “Other Blacks have been denied the right in this country; coaches who have the ability. I don’t take any pride in being the first Black coach in the Final Four. I find the question extremely offensive.”

Born Sept. 2, 1941, John R. Thompson Jr. grew up in Washington, D.C. His father was always working — on a farm in Maryland and later as a labourer in the city — and could neither read nor write.

“I never in my life saw my father’s hands clean,” Thompson told The Associated Press in 2007. “Never. He’d come home and scrub his hands with this ugly brown soap that looked like tar. I thought that was the colour of his hands. When I was still coaching, kids would show up late for practice and I’d (say) ... ‘My father got up every morning of his life at 5 a.m. to go to work. Without an alarm.‘”

Thompson’s parents emphasized education, but he struggled in part of because of poor eyesight and laboured in Catholic grammar school. He was moved to a segregated public school, had a growth spurt and became good enough at basketball to get into John Carroll, a Catholic high school, where he led the team to 55 consecutive victories and two city titles.

He went to Providence College as one of the most touted basketball prospects in the country and led the Friars to the first NCAA bid in school history. He graduated in 1964 and played two seasons with Red Auerbach’s Boston Celtics, earning a pair of championship rings as a sparingly used backup to Bill Russell.

Thompson returned to Washington, got his master’s degree in guidance and counselling from the University of the District of Columbia and went 122-28 over six seasons at St. Anthony’s before accepting the job at Georgetown, an elite school that had relatively few Black students. Faculty and students rallied around him after a bedsheet with racist words was hung inside the school’s gym before a game during the 1974-75 season.

Thompson sheltered his players with closed practices, tightly controlled media access and a prohibition on interviews with freshmen in their first semester -- a restriction that still stands for Georgetown’s basketball team. Combined with Thompson’s flashes of emotion and his players’ rough-and-tumble style of play, it wasn’t long before the words “Hoya Paranoia” came to epitomize the new era of basketball on the Hilltop campus.

Georgetown lost the 1982 NCAA championship game when Fred Brown mistakenly passed the ball to North Carolina’s James Worthy in the game’s final seconds. Two years later, Ewing led an 84-75 win over Houston in the title game. The Hoyas were on the verge of a repeat the following year when they were stunned in the championship game by coach Rollie Massimino’s Villanova team in one of the biggest upsets in tournament history.

Success allowed Thompson to rake in money through endorsements, but he ran afoul of his Georgetown bosses when he applied for a gambling license for a business venture in Nevada in 1995. Thompson, who liked playing the slot machines in Las Vegas, reluctantly dropped the application after the university president objected.

Centres Ewing, Mourning and Mutombo turned Georgetown into “Big Man U” under Thompson, although his last superstar was guard Allen Iverson, who in 1996 also became the first player under Thompson to leave school early for the NBA draft.

“Thanks for Saving My Life Coach,” Iverson wrote at the start of an Instagram post Monday with photos of the pair.

The Hoyas teams in the 1990s never came close to matching the achievements of the 1980s, and Thompson’s era came to a surprising and sudden end when he resigned in the middle of the 1998-99 season, citing distractions from a pending divorce.

Thompson didn’t fade from the limelight. He became a sports radio talk show host and a TV and radio game analyst, joining the very profession he had frustrated so often as a coach. He loosened up, allowing the public to see his lighter side, but he remained pointed and combative when a topic mattered to him.

A torch was passed in 2004, when John Thompson III became Georgetown’s coach. The younger Thompson, with “Pops” often watching from the stands or sitting in the back of the room for news conferences, returned the Hoyas to the Final Four in 2007.

Another son, Ronny Thompson, was head coach for one season at Ball State and is now a TV analyst.