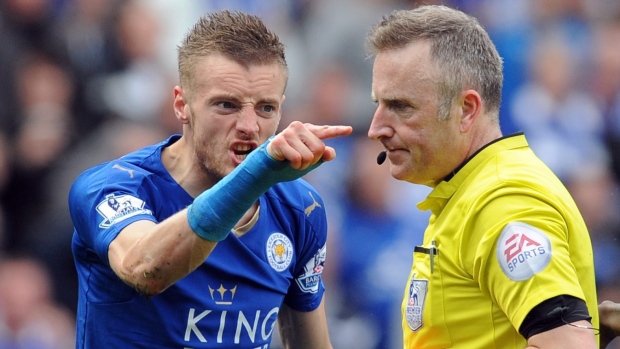 LONDON - Leicester striker Jamie Vardy has been banned for an extra game and will miss Sunday's trip to Manchester United, where the Foxes could clinch the English Premier League title.

The England forward has also been fined 10,000 pounds ($14,500) following his outburst at referee Jon Moss after being sent off in last week's 2-2 draw with West Ham.

Vardy, who has 22 goals for Leicester this season, automatically missed last Sunday's 4-0 win over Swansea.

He requested a personal hearing to explain his actions but was hit with the second-game suspension. The club was also fined 20,000 pounds ($29,000) for failing to control its players.

Vardy will return for Leicester's final home game of the season against Everton on May 7.

Claudio Ranieri's side needs only three points from its final three games to win the title.