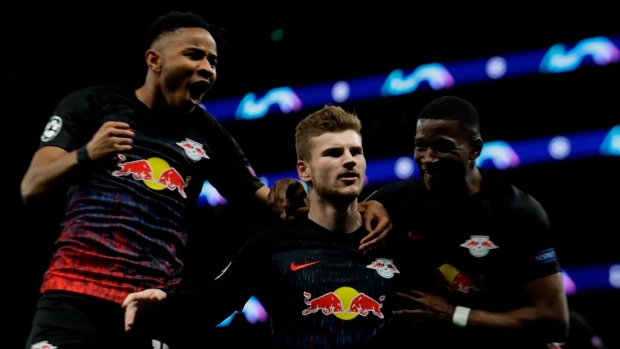 LONDON — Dele Alli showed his frustration by hurling a water bottle and shoe after being substituted. Jose Mourinho just used his words.

Tottenham, a Champions League finalist last season under Mauricio Pochettino, now has to overturn a 1-0 deficit against Leipzig to reach the quarterfinals.

While Leipzig could rely on Timo Werner netting his 26th goal of the season from the penalty spot in the first leg of the last-16 meeting, Tottenham struggled badly in attack without injured forwards Harry Kane and Son Heung-min .

“It's a situation like going to fight with a gun without bullets,” Mourinho said.

And the manager seemed to already be dreading a run of games when he'll have to rely on Lucas Moura and Dele up front.

“What worries me is that these are our players for the next however many matches," Mourinho said.

Not exactly an inspirational message to raise the spirits of a team after a loss at home.

“If I could,” Mourinho said, “I would move immediately to July 1.”

There is still more than three months of the season remaining, though.

Mourinho, recruited in November to replace the fired Pochettino, is dealing with the consequences of years of underinvestment in the team — particularly up front.

Even returning to the Champions League next season is far from certain, and could rely on fifth place in the Premier League being enough to secure a spot if Manchester City's European ban is upheld.

Leipzig is faring far better in Germany, sitting in second place in the Bundesliga.

Victory in north London — the first for the team in the knockout phase in the Champions League — is the latest step of a decade-long rise from the fifth tier for the team funded by a drinks firm.

At 32, Julian Nagelsmann is a young coach on the rise, producing stunning results in Europe, just like Mourinho was at the start of the century.

“We always try to attack the opponents very early and try to win the ball high up in their half," Nagelsmann said. “Today, in the second half, we tried to create a bit more of a counter. It's normal that we would have to defend a bit deeper later on, at only 1-0.”

A clumsy tackle by Tottenham defender Ben Davies on Konrad Laimer led to the penalty that Werner converted in the 58th minute.

Such was the dominance of Leipzig — particularly in the first half in north London — that it was the German visitors that looked the more established Champions League side rather than last season's beaten finalists.

“After the goal, we had a good chance to score a second but you know when you play in this stadium, with this crowd, it is difficult to win," Werner said. “So we are very proud. We are a very young team so we have to learn a lot about our mentality and how to get through these moments.”

Tottenham's frustration was encapsulated by Alli flinging his shoe on the ground in annoyance while walking to the bench after being substituted.

“I think he was angry with his performance,” Mourinho said. “Not with me.”

Tottenham was already trailing at that point, and it took going behind to find the goal threat that was absent in the first half.

Giovani Lo Celso curled a free kick against the post and Moura headed wide on a night when Tottenham's shortage of attacking options was exposed.

The second leg is on March 10 in Germany.

“We're not really happy with the result,” Tottenham goalkeeper Hugo Lloris said. “But we have to deal with that.”

Leipzig wasn't the only newcomer at this stage looking at ease on Wednesday night. Atalanta fared even better, routing Valencia 4-1 to close in on a spot in the quarterfinals in its first season in the competition.