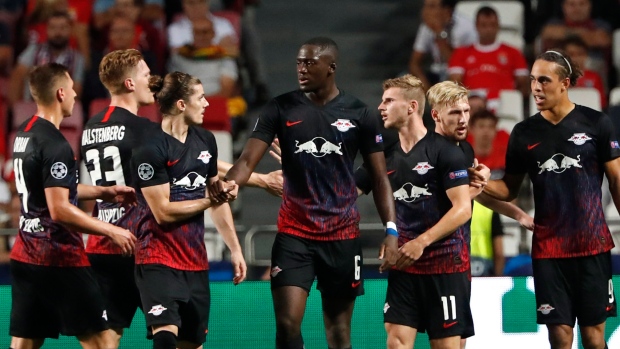 LISBON, Portugal — Timo Werner scored twice in the second half as Leipzig stunned Portuguese champion Benfica 2-1 in Group G of the Champions League on Tuesday.

Werner opened the scoring with a low shot from inside the area in the 69th and doubled the lead from close range in the 78th after a video review reversed an offside call that had initially disallowed the goal.

Substitute Haris Seferovic pulled Benfica closer in the 84th but the hosts were not able to get the equalizer at the Stadium of Light.

In the other group game, Lyon was held by Zenit St. Petersburg to a 1-1 draw at home.

Benfica had lost only one of its last eight European home matches. The Lisbon team was without coach Bruno Lage on the sidelines because of a ban for his sending off in a Europa League game last season.

It was an even match from the start, with the hosts struggling to create significant scoring chances and Leipzig not able to capitalize on its counterattacks until the late Werner goals.

European champions in 1961 and 1962, Benfica has made it out of the Champions League group stage only five times, the last in 2017. It reached the quarterfinals in 2016, losing to Bayern Munich.

This is the second time Leipzig is playing in the group stage of the top European club competition. It made its debut in 2017-18, when it failed to advance to the second round.