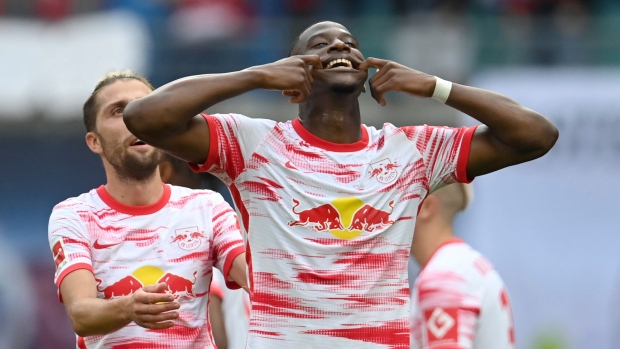 BERLIN (AP) — American coach Jesse Marsch wasn’t worried when Leipzig lost three and won only one of its opening five Bundesliga games. Marsch said it was just a matter of time before the results followed.

That wait ended Saturday when Leipzig humiliated Hertha Berlin 6-0 to finally ease the pressure that had been building after starting the season against several tough rivals. Marsch’s team lost against Mainz, Wolfsburg and Bayern Munich in the league.

“It’s difficult at the moment, but we have to stay positive, stay cool, work more together, and stay together,” Marsch said after the 4-1 loss in Munich on Sept. 11, days before Leipzig was humbled in a 6-3 loss at Manchester City in the Champions League.

Hertha started the league with three straight losses, and its visit proved a welcome one for Marsch.

Christopher Nkunku chipped the ball over the Hertha goalkeeper in the 16th minute, then set up Yussuf Poulsen for Leipzig’s second in the 23rd. Lukas Klostermann had a goal ruled out as Leipzig racked up nine efforts to the visitors’ one before Nordi Mukiele made it 3-0 in first-half injury time.

There was no letup for Hertha as Emil Forsberg converted a penalty on the hour mark, and Nkunku – who had been fouled for the penalty – scored from a free kick in the 70th. Amadou Haidara completed the rout seven minutes later.

The win will have reduced the pressure on Marsch and dumped it on Hertha counterpart Pál Dárdai, who has already faced criticism from within his club this season.

Cologne drew at Eintracht Frankfurt 1-1, Hoffenheim came from behind to defeat Wolfsburg 3-1 and Kevin Behrens scored in the 88th to give Union Berlin a late 1-0 win over Arminia Bielefeld.

Borussia Dortmund played at Borussia Mönchengladbach later Saturday, with visiting coach Marco Rose expecting a hostile reception after his switch between the teams in the offseason.