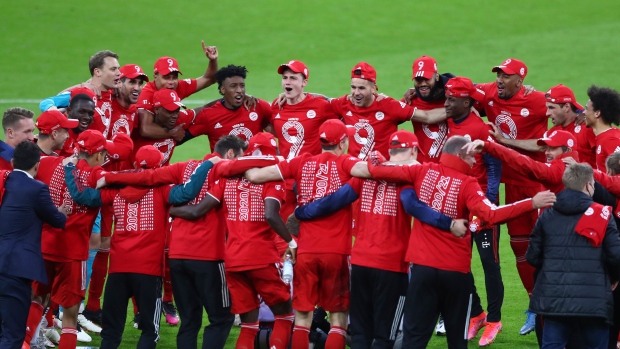 BERLIN — Bayern Munich clinched its record-extending ninth consecutive Bundesliga title without even kicking a ball, then celebrated with a 6-0 rout of Borussia Mönchengladbach on Saturday.

Robert Lewandowski's hat trick lifted his season tally to 39 goals, just one off the all-time record of 40 by Bayern great Gerd Müller in the 1971-72 season.

“I think it’s the first time in history that the German champions were crowned in the bus,” Dortmund coach Edin Terzic said.

Bayern moved the celebrations to the field.

Lewandowski got the newly crowned champions off the mark in the second minute and Jamal Musiala pulled the ball back for Thomas Müller to score the second goal in the 23rd. Müller crossed for Lewandowski to score his 200th goal for Bayern with a scissors kick in the 34th, and still the home side looked for more.

Lewandowski set up Kingsley Coman for the fourth before the break, then completed his hat trick with a penalty in the 66th.

Bayern ended the game with 10 men after Tanguy Nianzou was sent after a VAR consultation for taking down Breel Embolo as the last defender in the 73rd.

It made no difference. Serge Gnabry set up Leroy Sané to complete the rout in the 85th.

Leipzig’s defeat meant it could no longer overhaul Bayern, which held a seven-point lead before the late game. Two rounds remain after this weekend.

“Of course they deserve to be German champions, after this very good season, very consistent season,” Terzic said of Bayern. “But we’re happier about the points that we got today.”

Jadon Sancho scored twice for Dortmund to move to fourth after captain Marco Reus fired his team into a seventh-minute lead. Sancho capitalized on some lacklustre defending to make it 2-0 in the 51st.

Germany defender Lukas Klostermann pulled one back for the visitors in the 63rd, and Leipzig’s equalizer came in the 77th when Hwang Hee-chan shrugged off Mats Hummels’ challenge to set up Dani Olmo.

But Sancho saved the best for last, playing Raphaël Guerreiro in with his heel before running to accept the ball back and score in the 87th.

The injured Erling Haaland celebrated enthusiastically. Dortmund is hoping the star striker will be fit for Thursday, when the teams meet again in the German Cup final.

Leipzig coach Julian Nagelsmann, who is taking over at Bayern next season, was evidently disappointed his current team couldn’t push the Bavarian giant harder.

It’s Bayern 30th Bundesliga title and its 31st German championship including the 1932 title. The Bundesliga was formed in 1963 and the rest of Bayern’s titles came after its promotion in 1965.

Dortmund moved into the last qualification spot for the Champions League, though Eintracht Frankfurt can reclaim the position if it beats Mainz in their derby on Sunday.