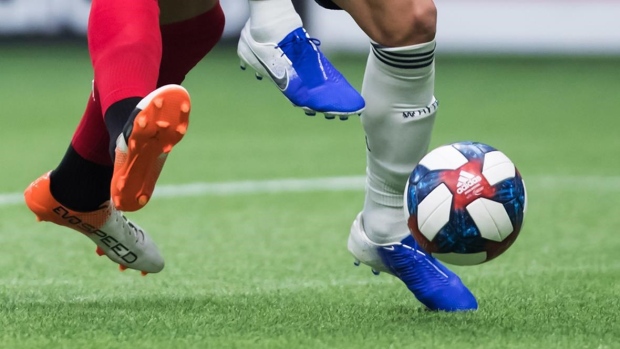 LENS, France (AP) — Lens swapped its traditional “blood and gold” colors for the blue and yellow of the Ukrainian flag on Saturday in a 3-1 win over Clermont in the French league.

Lens normally plays in red and yellow. The northern club said its message was to promote peace following Russia's invasion of Ukraine. Lens players wore yellow shorts as well as blue jerseys bearing the word “Peace” written in all six languages spoken in the team’s locker room. The outside walls of the hosts' stadium were also decorated in yellow and blue.

Lens rallied from a goal down to move to seventh in the standings.

Elbasan Rashani caught the hosts cold with a left-footed shot to give Clermont the lead after eight minutes. Kevin Danso leveled from a corner before Florian Sotoca put Lens in the driving seat deep in first-half stoppage time from a tight angle.

Massadio Haidara sealed the win from the rebound following Jonathan Clauss' effort that hit the post near the hour mark.

Clauss was influential throughout and received an ovation when he left the field with one minute left, two days after he received his first callup to France's national team.

The special shirts will go for auction next week on a digital platform while 500 replicas will be sold in local supermarkets. Lens said money from the sales will be used to finance a convoy of essential goods to Ukraine, and it emphasized the importance of “tolerance, solidarity and peace” in a statement.

Defending champion Lille brushed aside the disappointment of its exit from the Champions League — at the hands of Chelsea — with a 1-0 win at Nantes that revived its hopes of European football next season.

The sixth consecutive clean sheet moved Lille to sixth place, just four points behind Marseille and Lille, which are competing for a runner-up spot this season behind PSG.

Lille was reduced to 10 men in the 64th minute following Timothy Weah's straight red card. The American forward was sent off after a VAR decision for a tackle on Samuel Moutoussamy, who left the pitch injured.

Amadou Onana scored the winner from a corner with his first league goal in the 41st minute.

PSG, which has a 15-point lead at the top of the standings, plays at Monaco on Sunday.