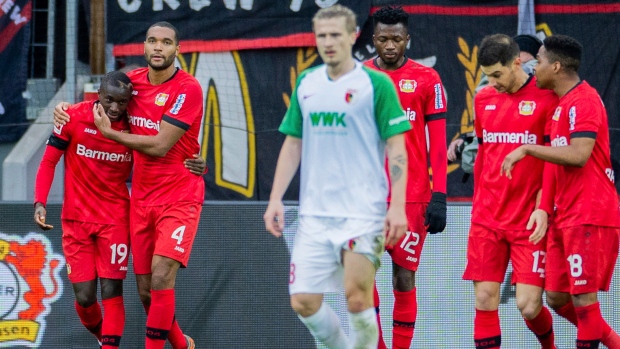 BERLIN — Bayer Leverkusen midfielder Kai Havertz became the third youngest player to record 50 wins in the Bundesliga as he helped his team beat Augsburg 2-0 at home on Sunday.

Goals in each half from Moussa Diaby and Nadiem Amiri were enough for Peter Bosz’s side to move level on 43 points with fourth-place Borussia Moenchengladbach and stake its claim for a Champions League qualification place. In Germany, the top four qualify for Europe’s premier team competition. Gladbach has a better goal difference for now.

It was Leverkusen’s fifth consecutive win in all competitions.

“We can't pat each other on the back for long. We had to win and that has to be our goal,” said Havertz, whoset up Diaby’s goal in the 25th minute with a brilliant through ball for the French forward.

The home side should have scored before Amiri made it 2-0 in the 59th. Sven Bender sent the ball on and five Augsburg defenders failed to close Amiri down before he scored his first Bundesliga goal for Leverkusen since joining in the summer from Hoffenheim.

Havertz almost scored afinethird goal minutes later but his effort crashed back off the crossbar. He was applauded off the field when he was taken off late.

Augsburg remained 11th, one point ahead of Union Berlin, which visits Eintracht Frankfurt on Monday.

Mainz wore special jerseys to mark the city’s carnival celebrations against Wolfsburg, which duly spoiled the party atmosphere with a 4-0 rout.