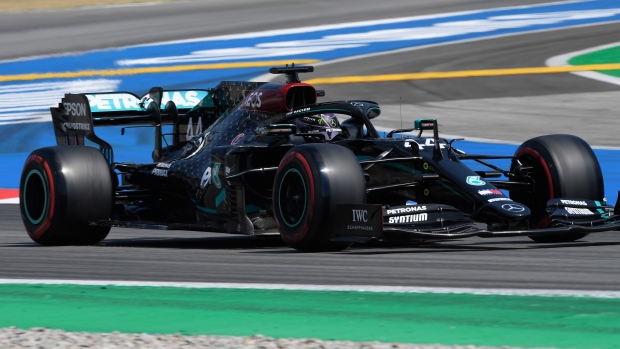 Bottas was ahead of championship leader Hamilton on the first two splits but lost a fraction of time when he came out too wide from a turn at the end of his lap.

The winding 4.7-kilometre ( 2.9-mile) Circuit de Barcelona-Catalunya, with its combination of slow and fast corners, is one of the hardest for overtaking. This gives Hamilton every chance of claiming an 88th F1 victory that would move him within three of Michael Schumacher's record.

As usual, Red Bull's Max Verstappen looked the only driver capable of staying with the Mercedes and he qualified in third place — .708 seconds behind Hamilton.

Racing Point's Sergio Perez, who missed the last two races as he recovered from the coronavirus, was fourth ahead of teammate Lance Stroll.

It was another bad day for Ferrari, with Charles Leclerc ninth and Sebastian Vettel a dismal 11th, despite having a new chassis fitted. Four-time champion Vettel is enduring his worst start to a season since 2008 and has yet to finish in the top five of a race.

“It would be nice to have an ice cream in here," Stroll joked over team radio.

Renault driver Esteban Ocon took part despite a heavy crash near the end of morning practice, where Hamilton was fastest ahead of Bottas and Verstappen. Mercedes also led practice on Friday with Bottas and Hamilton swapping places and Verstappen twice third.

Ocon went off the track when he had to swerve suddenly to the right to avoid crashing into the back of Kevin Magnussen, who hit the brakes late. He went into the wall and damaged the front of his Renault, bringing a red flag out to stop the session and giving the team just two hours to repair the car. Stewards investigated the incident and took no further action.

“The guys did a great job to get the car ready,” Ocon said.

The French driver made it through the first part of qualifying, known as Q1, where five are eliminated. They included both Haas and both Williams cars.

Verstappen won last Sunday's race at Silverstone to end a streak of three wins for Hamilton and four straight for Mercedes. It also moved the Dutch driver up to second place in the standings behind Hamilton, with Bottas dropping to third.

Hamilton has won the past three Spanish GPs, although those were held in May in lower temperatures not so tough on tires.