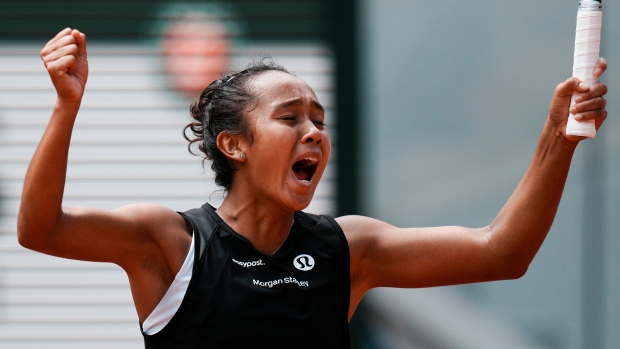 The 19-year-old Fernandez had more than twice as many winners, 35, as unforced errors, 17, and continued her run of impressive returning at the tournament. She broke Anisimova six times and now has won 23 of her opponents’ service games through four matches.

Fernandez, a runner-up at the 2021 U.S. Open, had never won more than two consecutive main-draw matches on clay until this trip to Paris.

"Today I was able to fight through some difficult moments and just enjoy the game as much as possible," she said. "Just to have another opportunity to play on (Court) Philippe Chatrier ... was just an amazing atmosphere and a great feeling for me."

Fernandez, the youngest player to win a WTA title in 2022, is seeded 17th at the French Open and will play Martina Trevisan of Italy on Tuesday.

“Every time I step out on the court, I still have something to prove,” said Fernandez, who was ranked only 73rd last September when she beat four-time major champion Naomi Osaka on the way to being the runner-up to Emma Raducanu at Flushing Meadows. “I still have that mindset I’m the underdog. I’m still young.”

Nadal punched his ticket into the Roland-Garros quarterfinal, where world No. 1 Novak Djokovic awaits.

With files from The Associated Press.