Best of 2021: Fernandez closes out Sabalenka to reach US Open final

Winning her first WTA title would have made 2021 a memorable enough year for Laval, Que.’s Leylah Annie Fernandez. However, the two weeks the 19-year-old spent shocking the world in Flushing Meadows, New York, on her run to the US Open final opened the eyes of the nation and the world to one of its newest and youngest tennis stars.

After two straight sets victories to open the final Grand Slam tournament of the year, Fernandez, at the time ranked 73rd in the world, stood across the net from defending champion Naomi Osaka as a massive underdog in the third round.

It was here that her headline-making run in the Big Apple truly began.

Fernandez roared back after dropping the first set to earn a 5-7, 7-6, 6-4 victory over the No. 3 seeded, four-time Grand Slam champion.

“I'm going to put on a show like I did tonight,” Fernandez said after the victory about what she would do in her next match, “and we’re going to see how it goes.”

She was correct, the show was only beginning.

The Canadian would go on to topple No. 16 Angelique Kerber, No. 5 Elina Svitolina and No. 2 Aryna Sabalenka on her way to a US Open final showdown with Great Britain’s Emma Raducanu.

In the midst of that run, where she knocked off three of the top five ranked players in the tournament, Fernandez also celebrated her 19th birthday.

While she would ultimately be unsuccessful in her bid to lift the championship trophy at Flushing Meadows, Fernandez showed even more maturity when she acknowledged the New York crowd after the final, that took place on the 20th anniversary of the Sept. 11 terrorist attacks.

"Thank you for having my back, thank you for cheering me on," Fernandez said after the loss. "I hope I can be as strong and resilient as New York has been the last 20 years." 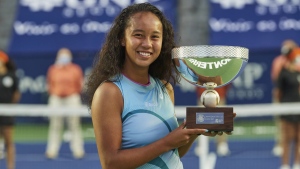 Not only did Fernandez reach her first Grand Slam final in 2021, she also captured her first title on the WTA tour when she defeated Viktorija Golubic to win the Monterrey Open in March.

After beginning the year as the 88th ranked player in the world, Fernandez has risen to a career-high 24th  and the sky is the limit for the talented teenager.

“I still, like I said, got a lot to prove, a lot to do on the tennis court,” Fernandez said after bowing out at the Indian Wells tournament in October. “I’m always hungry to get the results, to train harder and to work harder for the next time.”

Fernandez wasn’t the only Canadian to have success on the tennis court in 2021.

Felix Auger-Aliassime advanced to the semifinals of the US Open on the men’s side, before falling to eventual champion Daniil Medvedev of Russia. 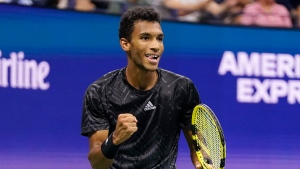 While the 21-year-old is still searching for his first title on the ATP Tour, he made the final of two tournaments in 2021, finishing runner up at the Murray River Open in Melbourne and the MercedesCup in Stuttgart.

Auger-Aliassime also advanced to the quarterfinals at Wimbledon after earning a victory over No. 4 seed Alexander Zverev.

The Montreal native cracked the Top 10 of the ATP rankings for the first time in 2021 following a semifinal loss to fellow Canadian Denis Shapovalov at the Stockholm Open in November.

“It is very big. It was one of my goals at the start of this year. I had to go from far as I was No. 21 in the world, so it wasn’t a given that I would finish inside the Top 10,” Auger-Aliassime told ATPTour.com.

Shapovalov, who was the defending champion in Sweden and would eventually fall in the final of the tournament, advanced to his first career Grand Slam semifinal in 2021 when he made the final four at Wimbledon. 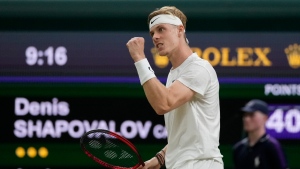 The Richmond Hill, Ont., native defeated Karen Khachanov in the quarterfinals at the All-England Tennis Club to set up a semifinal showdown with top seed Novak Djokovic.

While the 22-year-old would lose to the eventual tournament champion in straight sets, the Canadian pushed the No. 1 player in the world to the limit, or close to it, in all three sets, falling 7-6, 7-5, 7-5.

“It's almost good to have a little bit of a taste, because it just makes me want it that much more going into the next Slams and into the future,” Shapovalov said after the loss. “Now I know exactly what I'm capable of and where my game can be at. Also the things that I can improve, too, to beat Novak next time or go one step further.”

Gabriela Dabrowski found success on home soil in 2021, capturing the doubles title at the National Bank Open alongside Brazilian partner Luisa Stefani as they defeated Darija Jurak and Andreja Klepač in the Montreal final.

The Ottawa native and her partner from São Paulo also advanced to the doubles finals at the Western & Southern Open in Cincinnati and the Mubadala Silicon Valley Classic in San Jose.

The pair reached the semifinals of the US Open, but were forced to withdraw from the Grand Slam tournament after Stefani suffered a knee injury.

Dabrowski also advanced to the final of the Madrid Open with Demi Schuurs of the Netherlands.

Toronto's Sharon Fichman teamed up with Mexico's Giuliana Olmos to bring home the Italian Open doubles title with a 4-6, 7-5, 10-5 victory over Kristina Mladenovic and Marketa Vondrousova.