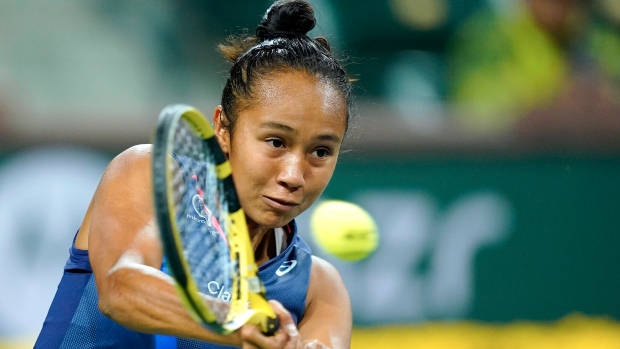 Canadians Leylah Annie Fernandez, Felix Auger-Aliassime and Rebecca Marino will all be on court for Day 2 action at the Australian Open.

Fernandez, seeded for the first time at a Grand Slam at No. 23, will take on Australia’s Maddison Inglis to kick off her tournament. The 19-year-old, the runner-up at the 2021 U.S. Open, was eliminated in the first round of the Australian Open last year by Elise Mertens.

Since her magical run at Flushing Meadows, Fernandez has played at Indian Wells and Adelaide International 1, losing in the Round of 16 on both occasions.

Auger-Aliassime, the No. 9 seed, draws Finland's Emil Ruusuvuori in the first round.

The 21-year-old made it to the fourth round of the Australian Open in 2021 before losing in five sets to Aslan Karatsev. After losing in the quarterfinals at Wimbledon, the Montreal, Que. native had his best result of the season at Flushing Meadows, reaching the semifinals, losing in straight sets to eventual U.S. Open champion Daniil Medvedev.

Auger-Aliassime started his 2022 season with a victory, helping Canada win the ATP Cup over Spain in Sydney alongside Denis Shapovalov, Brayden Schnur and Steven Diez.

Auger-Aliassime will be on court following Fernandez at approximately 11 pm ET/8 pm PT on TSN5.

Marino takes on Marie Bouzkova of the Czech Republic in her opening round match. The 31-year-old punched her ticket to the main draw of the Australian Open after beating Russia’s Kamilla Rakhimova in the final round of qualifying.

The Toronto, Ont. native made it to the second round of the Australian Open in 2021, her first Grand Slam tournament appearance since 2013, before losing in straight sets to Czech Republic’s Markéta Vondroušová.