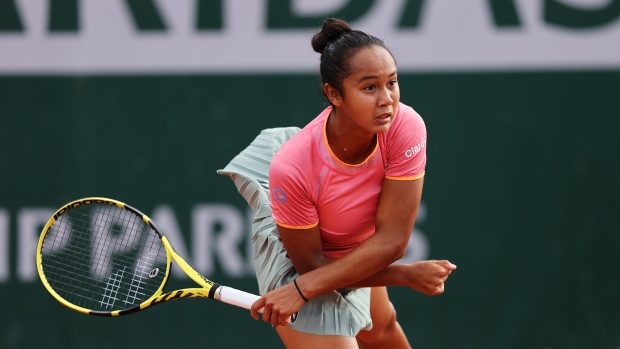 Canada's Leylah Fernandez staved off two set points in the second set while winning the last four games to finish off a 6-0, 7-5 victory over Kristina Mladenovic of France in the first round of the French Open on Sunday.

The 19-year-old from Laval, Que., successfully defended her title at the Mexican Open in March and followed it up by making it to the Round of 16 at Indian Wells later that month.

Earlier on Sunday, fellow Canadian Felix Auger-Aliassime took care of two missing items on his resume at Roland Garros. The 21-year-old picked up a French Open victory for the first time in three tries and won a match after dropping the opening two sets.

"It was disappointing in the match to see how things were going, I really hoped for better," Auger-Aliassime said.

"But I think that's why I also wanted to really push myself and really try everything. ... I feel like I left it all on the court. Because this was an important day for me, an important win. I really wanted to get this first one here."

The 31-year-old from Vancouver was appearing in the French Open for the first time since 2011.

Gauff had some serving issues against Marino but managed to set aside 10 of the 12 break points she faced. One key stat that helped Gauff was that she made only 16 unforced errors, while Marino accumulated 40.