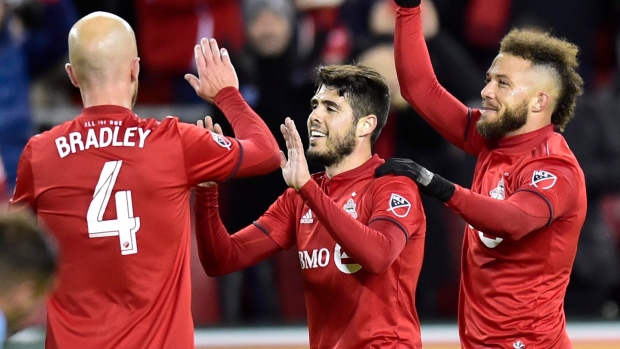 ATLANTA — The Jozy Altidore storyline deepened Tuesday when the injured Toronto FC striker did not emerge from the team bus for training at a local soccer club.

Combine that with an Instagram photo of Altidore and fiancee/tennis star Sloane Stephens, in couple mode with a Toronto placeline — posted Monday by Stephens after the team had left for Atlanta — and the mystery over the big man with the quad strain grew.

After training, coach Greg Vanney provided some enlightenment. Altidore was not missing in action. He was undergoing a second MRI back home and was expected to rejoin the team Tuesday evening.

Whether he takes part in Wednesday's Eastern Conference final against defending champion Atlanta United FC depends on the MRI.

But the way Vanney chose to answer the first question about Altidore spoke volumes.

"First our team is ready to play," he said. "And we have a good team and we're looking forward to playing in Atlanta. That's the primary thing that everybody should be talking about.

"Jozy is having a follow-up MRI ... We'll see where he's at based on the reading of the MRI and everything else. But we've got a group of guys who are in a great place. They're ready to play. We'll see if Jozy is capable of playing a role (Wednesday)."

Perhaps Vanney was just tired of the latest round of Altidore questions. But his message seemed to be that TFC had a lot of healthy weapons ready to be rolled out.

Pressed on the issue, Vanney stuck to his guns that Altidore could still play a limited role.

"The odds of him starting are very low. The odds of him playing a role, I think, are the same. It's a question of how much and what he can do. What the MRI tells us is how much healing has taken place. Like I've said many times, he won't be at 100 per cent. The question is at what percentage will he be at and at what risk does that play.

"When you have a goal-scorer and a guy that you may need down the stretch, you've got to go with whatever you think he might be able to get. But we're always going to err on the side of being smart, being safe, being intelligent. Our hope is this isn't our last game. We're playing to try to get into one more game (the MLS Cup)."

It's worth noting that Wednesday will mark 24 days since Altidore was injured. As of Monday, he had not tested his leg by taking a shot. TFC may be looking for a miracle rather than an MRI.

Altidore missed the two previous playoff games — against D.C. United and NYCFC — due to an injury suffered in the regular-season finale.

Toronto has moved Spanish playmaker Alejandro Pozuelo up front in his absence. And TFC has been rolling along nicely even if it took extra time and a stoppage-time penalty to get here.

While Altidore is a physical presence at the tip of the Toronto spear, Pozuelo poses a different puzzle when leading the Toronto attack. The Spaniard moves around the field, dragging defenders with him — which can open up space for the likes of wingers Nicolas Benezet and Tsubasa Endoh and midfielders Jonathan Osorio and Marky Delgado.

Pozuelo can also deposit the ball on a dime.

Atlanta has more than its own share of attacking talent with reigning MVP Josef Martinez a goal waiting to happen. The Venezuelan has 81 goals in 90 career MLS regular-season and playoff games.

"He has a tenacity to score goals that's unmatched in the league, just a real passion and desire to be the first one in the (penalty) box, to be the first one to the ball," said Vanney. "He'll play 90 minutes looking for that one opportunity that can make a difference. So it really requires the utmost concentration by everyone in the backline to always understand where he's at."

The good news for Toronto is Omar Gonzalez has been deemed good to go. The influential centre back was on the bench for the win over New York City FC last week but said he is fully healthy now.

Gonzalez says he liked what he saw of his team while watching from the bench last time out.

"I was good, I was calm. Because I saw a really great team, on the field," he said. "A team who was really working together, fighting for every single ball, paying good football, keeping the ball, making it tough for other teams."

Vanney said more of the same will be needed with another road challenge Wednesday. "One of our goals is to outwork them," he said.

Vanney is looking forward to a tactical battle with Atlanta coach Frank de Boer, knowing both teams can offer different formations and threats.

"Soccer is really an if-then sort of thing. If you see this, then you do this," said Vanney. "The better teams can kind of adapt during the course of the game and show different looks and adjust to different looks. That's one of the things that our group has gotten better at and it continues to be something that we're very proud of — is our flexibility."

A WIN AND: Toronto returns to the MLS Cup for the third time in four years. Atlanta is looking to defend the crown it won last year in beating Portland.

GOOD TO KNOW: Toronto has never lost an MLS Cup playoff game outside of Canada.