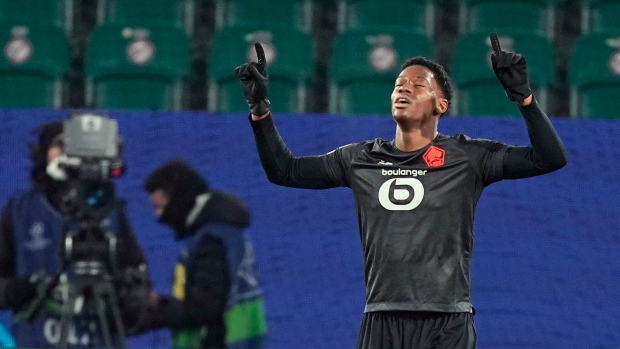 WOLFSBURG, Germany (AP) — Lille qualified for the Champions League last 16 for the first time in 15 years as the French champion beat Wolfsburg 3-1 on Wednesday to win its group.

Either team would have qualified with a win in a tight Group G, and it was Lille which seized the opportunity.

Veteran striker Burak Yilmaz gave Lille the lead after Jonathan Ikoné charged down the right flank on a quick break and crossed low for the Turkish striker arriving on the edge of the penalty area to finish.

Wolfsburg posed little threat except with set pieces and a penalty shout just before halftime for handball which was rejected by video review.

Still, the German team stayed in the contest until the 72nd minute, when Canadian forward Jonathan David doubled Lille's lead with a shot in off the post. It came from a pass by Angel Gomes, who scored Lille's third soon after.

Swiss winger Renato Steffen responded with a shot into the top corner in the 89th minute, but it was too late for a comeback.

Lille has only qualified from the group stage once before, when it lost to Manchester United in the round of 16 in 2006-07. Wolfsburg finished last and was eliminated.

Salzburg qualified from second place in Group G after beating Sevilla 1-0 in the other game.