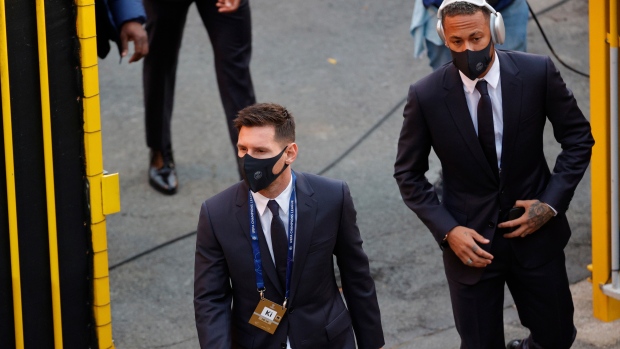 BRUGGE, Belgium (AP) — PSG’s formidable attacking trio of Lionel Messi, Neymar and Kylian Mbappé was left frustrated by a spirited Club Brugge on Wednesday in a 1-1 draw in the Champions League.

Messi hit the crossbar during his 150th appearance in the competition but could not score for his new club after PSG coach Mauricio Pochettino sent out his three superstars all together for the first time.

Messi had previously made only one substitute appearance for PSG — in a 2-0 win against Reims last month — since he ended his career-long association with Barcelona last month.

Brugge captain Hans Vanaken drew the hosts level in the 27th minute after Mbappé set up Ander Herrera’s opener in the Group A game in the 15th. In the group’s other match, Manchester City beat RB Leipzig 6-3.

Mbappe played in a center forward role with Neymar and Messi deployed on the wings but the trio often switched positions. They played 50 minutes together before Mbappe, who suffered an apparent ankle injury, was replaced by Mauro Icardi.

PSG imposed a fast tempo and monopolized possession from the start as the visitors struggled to string passes together in the early stages. But the Belgian champions gradually got into the match and enjoyed several good spells of pressure while PSG lacked cohesion and gave the ball away too often in midfield.

Brugge came back with the same attacking spirit after the interval. Forwards Noa Lang and Charles De Ketelaere were a constant threat and the hosts found space at ease but lacked a cutting edge.