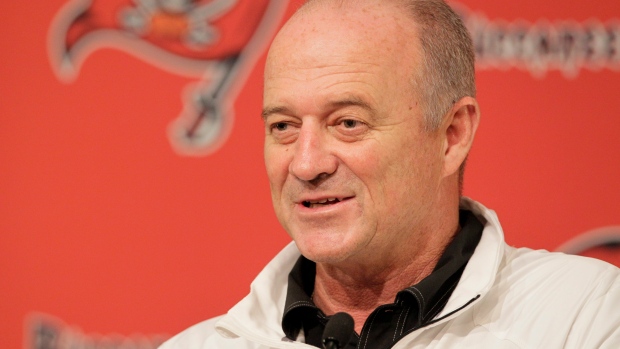 VANCOUVER - Jeff Tedford has returned to the CFL.

Tedford, who played six seasons as a quarterback from 1983-'88 with Hamilton, Calgary, Saskatchewan, and Winnipeg, was named head coach of the B.C. Lions Friday.

He replaces Mike Benevides in the position. Benevides was fired following B.C.'s 50-17 loss to the Montreal Alouettes in the East Division semifinal.

Tedford, 53, previously worked as an assistant under Lions general manager Wally Buono in Calgary from 1989-'91.

"I've always had fond memories and a soft spot in my heart for the CFL, both as a player and a coach," said Tedford during a late afternoon news conference at the Lions' practice facility. "I had great times doing both."

Tedford helped the Stampeders reach the Grey Cup in 1991. The next season, he was hired as an offensive assistant at Fresno State where, as a quarterback for two seasons, he had set records for passing yardage (4,872) and touchdowns (35).

He was later promoted to offensive co-ordinator at Fresno State (1993-97) and held the same position at Oregon (1998-2001) before he became the head coach at the University of California. He was named the Pac-10's top coach twice and led the Golden Bears to a conference title in 2006.

Earlier this year, Tedford was hired to be the Tampa Bay Buccaneers' offensive co-ordinator but left the team during the pre-season to undergo a heart procedure. That ultimately resulted in the two sides mutually agreeing to end his NFL deal, making Tedford available to join the Lions.

Tedford says he is looking forward to developing a stable of young quarterbacks in B.C., which includes Rodgers' younger brother Jordan and holdover Travis Partridge as well as veteran Travis Lulay, who sat out most of the 2014 season with a shoulder injury.

The Lions finished last season 9-9, making the playoffs as the cross-over team in the East Division.

Tedford says he came away "very impressed" from a meeting with Lulay this week and plans to work with him closely as he continues his recovery, which the coach views as critical to the team's success.

"I'm very anxious to work with him closer," said Tedford. "Thankfully, he's close enough to get here on a consistent basis, where we can visit."

Tedford says he is also eager to organize his coaching staff and get to know veteran players. He was non-committal on the future of assistants, saying he had to discuss their goals with them and consider others with whom he has worked. But he wants to ensure that the Lions coaching staff has a considerable amount of CFL experience.

After more than two decades away from the CFL, he does not believe it will be too difficult to reacquaint himself with three-down football.

"While I haven't been following it that closely to understand all of the nuances of what's going on, I will get back into that very quickly," Tedford said. "I'll watch a lot of tape."

The Lions came under criticism last season for an inconsistent offence led by 14-year veteran quarterback Kevin Glenn, who has since been released. While Tedford is known for tutoring quarterbacks and offensive expertise, he wants to make sure the Lions excel on offence, defence and special teams.

"I believe it's important to be solid in all three phases," he said. "I'm not going to be so worried about the past, I'm really not. I'm just focused on the future."

Tedford has been spending the week in the Vancouver area getting familiar with the city. The late afternoon press conference was designed to accommodate his wife Donna, a Calgary native, who was eager to attend but had to fly in from Tampa Bay earlier in the day.

The Tedfords, whose two sons were born in Calgary, are looking forward to resuming their life in Canada and having the chance to spend more time with Donna's family.

The new Lions coach called the move a "lifestyle" decision after he had two stents installed in his heart. He has been "good to go" for a couple of months.

"I have as much energy now as I've ever had," Tedford said, adding he is focusing on exercising regularly and eating right.

He and Buono took part in an official contract signing during the news conference. Tedford says the deal is only for two years, because the Lions did not offer a longer term.

"Insurance is one thing, but I wouldn't have moved my family 3,000 miles if I didn't feel pretty good about (the opportunity)," he said.

Tedford says he took the job because of his relationship with Buono and respect for the Lions franchise, which he always felt was difficult to play against.

Buono, who kept in contact with Tedford over the years, says he is looking forward to having his former protege back in the fold and pleased with having someone who has built a solid career as "a good advertisement" for the CFL. But both Buono and Tedford dismissed the idea that the hiring was about helping the Lions rebuild.