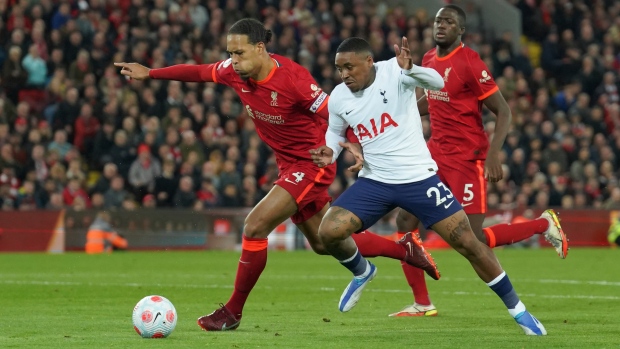 LIVERPOOL, England (AP) — Liverpool drew with Tottenham 1-1 and went to the top of the English Premier League on Saturday but handed Manchester City a chance to pull three points clear.

The end of a 12-match league winning run at Anfield dampened Liverpool’s bid for a quadruple of trophies.

City was at home to Newcastle on Sunday when the defending champion can regain first place and go three points ahead.

Tottenham’s resolute defense was repelling Liverpool attacks until a shot from Luis Díaz outside the penalty area deflected off Rodrigo Bentancur and beat goalkeeper Hugo Lloris.

Despite Tottenham holding Liverpool for a second time this season, the point hurt its attempt to overhaul Arsenal in fourth place with three games to go.

Ahead of Thursday’s north London derby, Arsenal was a point ahead of Tottenham, and plays Leeds on Sunday.