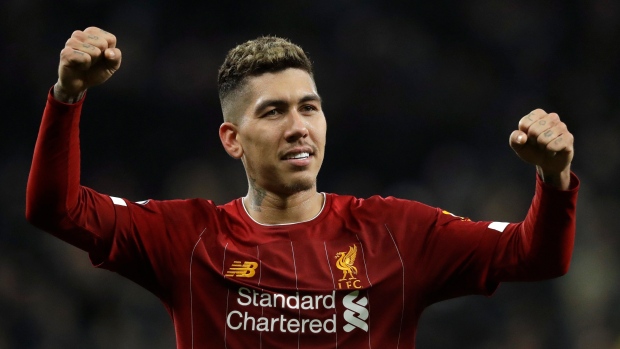 LONDON — Roberto Firmino sent Liverpool 16 points clear at the top of the English Premier League by clinching a 1-0 victory over Tottenham on Saturday.

Jordan Henderson headed across to Mohamed Salah, who held the ball up in the penalty area before passing to Firmino, who struck in the bottom corner in the 37th minute.

It allowed Liverpool to take full advantage of second-placed Leicester losing to Southampton, with Jurgen Klopp's side extending an already commanding lead with 17 matches remaining.

Liverpool is unbeaten with 61 points from 21 games — a record haul at this stage in the Premier League.

But back-to-back losses have left Tottenham drifting in eighth place after squandering chances to equalize in the second half against Liverpool. Son Heung-min was played through by Lucas Moura but the South Korean placed his shot well over.

As the game was being played, Tottenham striker Harry kane posted photos online from the hospital after surgery on his left hamstring.