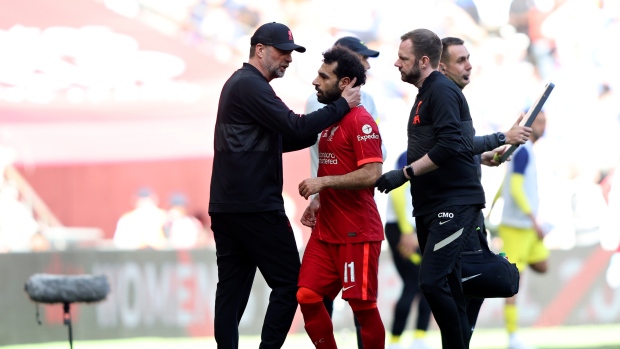 LONDON (AP) — Liverpool forward Mohamed Salah went off injured during the FA Cup final against Chelsea but it was downplayed after they won on Saturday.

The English Premier League top scorer went down with no other players around him and he received treatment on his right knee before he was able to walk off unaided.

Salah was replaced in the 33rd minute by Diogo Jota and Liverpool went on to beat Chelsea 6-5 on penalties after the game ended 0-0 after 120 minutes.

There were also concerns when Virgil Van Dijk was brought off at the end of regulation time but manager Jürgen Klopp had no worries about the fitness of the center back or Salah.

Liverpool is still chasing the Premier League title with two games remaining in the next week, and with a Champions League final meeting with Real Madrid in two weeks on May 28.