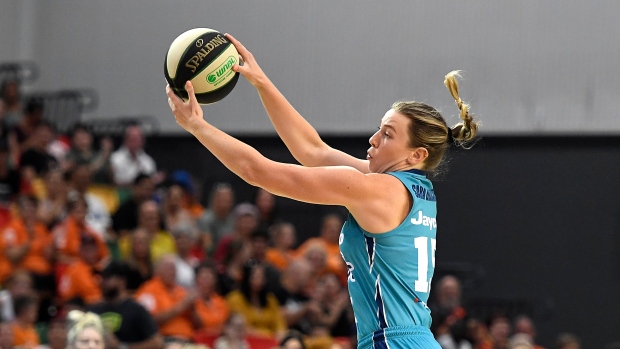 SYDNEY, Australia — Sara Blicavs has been given a late call-up to the Tokyo Olympics after WNBA star Liz Cambage’s withdrawal from the Australian women's basketball squad.

Blicavs, whose father and mother both represented Australia in basketball, is set to make her Olympic debut.

Basketball Australia confirmed on Monday that Cambage is under a code of conduct and integrity investigation for an incident during last week’s pre-Games scrimmage against Nigeria in Las Vegas.

Cambage, who plays with the WNBA's Las Vegas Aces, made an announcement last Friday to say that after weeks of feeling so anxious she could hardly sleep or eat, she'd decided the best way to ensure she maintained her mental and physical health was to pull out of the Olympics.

The two-time Olympian said she'd been worried about life inside the so-called bubble at the Tokyo Games, where heavy restrictions are in place because of the COVID-19 pandemic.

Australia had to get permission from the the IOC to have Cambage's spot filled.

“When you face some kind of adversity, when someone leaves the team, it means that you can replace them,” Opals coach Sandy Brondello said on Tuesday. Playing in the Olympics “is a dream that we all want to achieve in our careers and Sara’s been playing great."