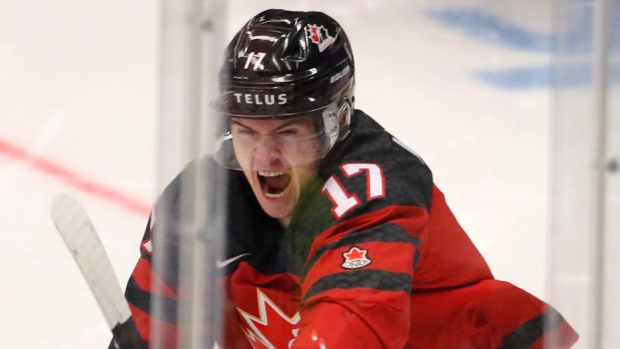 Before they went out for their first shift of the World Junior semifinal game in January, Connor McMichael had a message for linemate Ty Dellandrea.

"He said, 'Just get me the puck in the high slot and I'm going to introduce myself to the back bar,'" Dellandrea revealed after the game. "And that's what he did. He called it."

The goal, 1:48 into the game, set the tone as Team Canada cruised to a 5-0 victory against Finland.

"It all started in practice," McMichael explained. "I did that once with him in practice and it worked so I was thinking, 'Why not try it again?' Just saying stuff like that will loosen us up before big games. You want to take it serious, but you also don't want to have too many nerves, so I think that was just calming the nerves and, obviously, it worked."

🇨🇦 gets on the board first! Connor McMichael finds mesh and Canada takes an early 1-0 lead over Finland. pic.twitter.com/0xdf01dITz

McMichael has actually channeled his inner Babe Ruth and called his shot on a few occasions in his young career.

"It doesn't work every time," he acknowledged, "but I like doing it for fun and trying to challenge myself a little bit."

McMichael has good reason to feel confident in his abilities. He potted 47 goals in 52 games with the London Knights last season. And he scored five goals in seven games at the World Juniors, finishing second on Team Canada in that department despite playing as an 18-year-old.

A Capitals first-round pick in 2019, McMichael aimed to be a more consistent producer when he returned to London from his first NHL training camp and made good on that objective. In fact, McMichael was only held off the scoresheet in seven games during the Ontario Hockey League season, finishing with 102 points.

​McMichael started the World Juniors in a depth role, but he was​ determined to make an impact. He actually scored Canada's first goal of the tournament sparking a comeback against the Americans on Boxing Day.

When star left winger Alexis Lafreniere went down with an injury during a blowout loss to the Russians in the next game, head coach Dale Hunter, who also coaches McMichael in London, promoted the Ajax, Ont. native.

Even after Lafreniere returned in the quarter-finals, McMichael remained a key cog in the Canadian attack. It was his goal in the third period of the​ gold-medal game that brought Canada back within 3-2 and set the stage for a dramatic comeback win.

More will be expected from McMichael this year as he is one of seven eligible returnees for Team Canada at the 2021 World Juniors.

"It's probably going to be a bigger role and I'm looking forward to that and ready to take that on," he vowed.

McMichael spoke with TSN via Zoom this week from London, Ont. and explained what makes his shot so lethal. He also shared what he learned from watching Alex Ovechkin and Nicklas Backstrom up close at Capitals camp. The following is an edited transcript of the conversation.

I want to play a little word association with you when it comes to your Team Canada teammates. What's the first thing that pops into your head when you think of Lafreniere?

"Unreal. That kid, the stuff he does is just unbelievable. When it looks like there's not going to be a play to be made, he can find one and he just wows you every time he has the puck."

What about Lethbridge centre Dylan Cozens?

"Elite. His speed, his hockey sense and his shot, I think he's just a full package. He can do everything."

"Big and strong body. That guy's really skilled and you combine that with his body, his strength, it’s unbelievable. So, yeah, I hope we get him back this year."

"Smart. His hockey sense is unbelievable. He's also got a great shot. He's going to be a big part of our team this year."

"Smart as well. Smart and skilled and speedy. I’d have to put a lot of words in for him. He can just do it all. He's one of the best D I’ve ever seen. He's just so mobile and so smart with the puck, it’s unbelievable. I don't like playing against him, but I loved him on the team last year."

Every time I ask about this guy, people always break into a smile, Vancouver Giants defenceman Bowen Byram?

"Yeah, he's a funny guy. He's goofy. He just loves joking around and he's obviously an elite defenceman as well, so he'll be a huge part of our team."

Why there's never a dull moment with Canada's 🇨🇦 Bowen Byram on and off the ice: https://t.co/B3GWM0fe3V #TSNHockey #WorldJuniors pic.twitter.com/Z45jj0riHN

I also did word association with some of those guys recently and Cozens called you a ‘sniper' while Drysdale used the word 'finisher.' So, what makes your shot so good?

"I work on my shot a lot. I use a little more deception in my hands to fool goalies and maybe look one way and shoot the other way. I watch some NHL clips with our coaching staff here in London and they show me the best goal scorers in the League and how they do it, so I try and pick apart every player and use that. I think it's mostly your hand placement or your eye placement, you got to try and fool goalies."

When you're watching NHL clips, who jumps out the most?

"A big guy that we watch a lot is Auston Matthews. Like, his curl and drags, his deception with his shot, he's unbelievable. He's able to beat goalies before they move so ... I love watching his clips."

Being around Ovechkin during Capitals training camp, what do you notice about his shot?

"Everything. His shot is so hard, it's so accurate, it comes off his stick so quick. Honestly, in practice I was in love with just watching him shoot the puck and after practice he'd be taking some one-timers and I'd be able to stop and stare and it was pretty cool being around him. I try to pick little things from everyone, but there's not much I can pick from his game, because he's unbelievable."

Do you notice anything different about Ovechkin seeing him up close?

"He's a lot bigger in person. He's big on TV, but then you see him in person and he's just a beast. The way he uses his body and everything, he's just an all-around great player. I was kind of shocked about how thick and how big he was."

There's so much great offensive talent in the Capitals organization for you to learn from and be a sponge around. What stood out to you about Backstrom?

"Just how smart he is, his hockey sense. He's not the biggest guy, but he's able to get around just using his hockey sense and his stick and that's kind of the game I play. I'm not the biggest guy, but I feel like I have great hockey sense and a good stick so I'm trying to pick a lot of things from his game. He's just so responsible and all the coaches trust him, so that's kind of the game I'm leaning towards and he's a great role model."

The World Juniors will be played in a bubble in Edmonton. You were inside the NHL bubble in Toronto with the Capitals. What stood out about that experience?

"The coolest part was just being around every single team and the activities all the players could do off the ice together. They go to battle, but off the ice they're all hanging out playing some lawn games or whatever it was, so I thought that was pretty cool. It was just a hockey community, so it was cool to be around all those guys. And obviously just watching them play playoff hockey was amazing."

Excited to be with this group going to Toronto! @capitals pic.twitter.com/PBsSSdbstl

What are you doing these days to stay in shape?

"I've been working out six times a week, skating every day and just trying to get back into the game. I miss it a lot so I'm excited to get going. I feel like time is going by slower and slower the closer we get."

Capitals assistant GM Ross Mahoney recently said he's curious to see the gains you made strength-wise. How much stronger do you feel now versus the end of last season?

"I've gotten a lot stronger. I mean, it's been a longer off-season than usual, so I've had more time to gain muscle and strength so, yeah, I'm looking forward to Capitals camp and hopefully showing that I've improved a lot."

Where do you feel the gains most?

"I feel like I've gotten a lot stronger in my lower body. I feel like my strides might be more powerful and then in the corner and below the goal line when the D is pushing me off I feel like I can battle back a little bit stronger. I just feel like I'm ready to play against full-grown men."

"I haven't played a game since March so just hopping into the fire will be tough. But we got a couple exhibition games together to get ramped up, so we'll have to take those pretty seriously ... it'll be a little bit difficult, but I think we have the group of guys able to get it done."