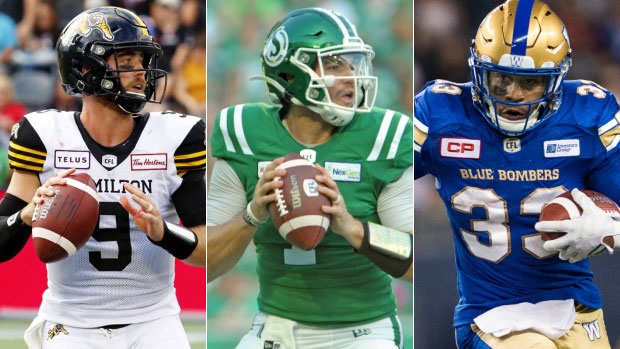 It was a memorable year for Canadian football.

The “Year of the Backup Quarterback” produced a Grey Cup-winning team that started three different quarterbacks for at least four games, two MOP nominees who began the season as a No. 2s in Vernon Adams and Cody Fajardo, and emerging potential new stars in Calgary’s Nick Arbuckle and Hamilton’s Dane Evans.

It was also the year of Andrew Harris, who earned distinction of being the league’s biggest newsmaker, along with being the first Canadian to be named MVP of a Grey Cup since Russ Jackson some 50 years earlier.

And while there were steps towards the establishment of a tenth team in Atlantic Canada, there remain concerns about the viability of a franchise in Montreal – a franchise that was run by the league this past season and remains without an owner today.

We also saw the first “global” players in the CFL and a slew of off-season head coaching changes for the second year in a row.

Here’s a look back on the biggest storylines of the year and where things may head in 2020.

There have been four new head coaches named this off-season, following the five changes that occurred leading up to the 2019 season.

The problem with that much turnover each year is there aren’t four or five new qualified head coaching candidates that emerge every season. The pipeline in Canadian football simply isn’t that big.

It’s also not good for a profession that is already volatile enough without teams turning away from head coaches after just one bad season.

The league’s football operations salary cap, with financially punitive measures for firing coaches with term remaining, doesn’t appear to have slowed things down.

A big part of this has to do with the CFL being a gate-driven league, where a coach’s popularity with fans inevitably comes into play with deciding whether he should stay or go.

But all of this ignores the fact that every team can’t win, and there are going to be teams that miss the playoffs no matter who coaches them.

Consider that in the West right now, four of the five head coaches are former Grey Cup champions and the other one coaches the defending West Division winners. Yet, one of them is going to have a season in 2020 where they win five or six games – or fewer.

There are certainly circumstances where head coaches should be fired after a bad season. But when that’s the standard across the league, there’s no way the coaching pool can keep producing enough quality candidates to fill those jobs.

On the field, the Montreal Alouettes exceeded expectations in 2019 and hosted a playoff game for the first time in five years.

Off the field, it was a much less successful season, with the league being forced to take over ownership of the franchise before the start of the season while it continued looking for new owners. The uncertainty around this franchise has continued into the early part of the off-season.

After interim general manager Joe Mack made it known he didn’t want to return in 2020, the team executed a search that resulted in the successful candidate (Winnipeg director of college scouting Ryan Rigmaiden) turning down the job.

That process is now on hold until the new year when the league hopes to have new ownership in place.

The league’s other eight teams carried the financial weight of paying Montreal’s bills in 2019 and aren’t anxious to do so again – to say the least.

Meanwhile, the GM search will need to consider some other candidates on a list that might include some of the following:

David Turner: Currently Edmonton’s director of player personnel, Turner has a decade of NFL scouting experience plus success in the Arena League.

Brendan Taman: The former GM of the Roughriders and Blue Bombers has been out of the league since 2015. Taman was the GM in Winnipeg when Als head coach Khari Jones was playing quarterback.

Eric Tillman: He’s won Grey Cups with multiple teams and last worked in Hamilton from 2013-18 where he helped build the team that went 15-3 in 2019

Geroy Simon: The Hall of Fame receiver has spent five years in the BC Lions front office, currently their director of Canadian scouting

Danny Maciocia: A Montreal native and former GM with Edmonton, Maciocia has been head coach at the University of Montreal since 2011.

The CFL has truly become a free-agent league since the introduction of one-year contracts. That’s not such a good thing for continuity or fan identification with players and makes it harder on every general manager to build a team.

The CFL released a list of roughly 280 potential free agents at the end of November – a number that will be trimmed considerably by the time the market opens in mid-February. But among quarterbacks who started games in 2020 alone, the list of pending free agents includes Jeremiah Masoli, Jonathon Jennings, McLeod Bethel-Thompson, James Franklin, Logan Kilgore, Matt Nichols, Zach Collaros, Chris Streveler and Nick Arbuckle.

Toronto and Ottawa are the two teams with obvious needs at quarterback. Watching the game of musical chairs play out between now and mid-February should be fun.

The CFL’s new collective agreement was supposed to provide an opportunity for any player to workout for NFL teams and sign a contract, regardless of the status of his CFL contract.

But the two league’s haven’t been able to agree to the conditions around that provision, specifically that CFL teams don’t want to be releasing their players to sit on NFL practice rosters.

As such, players with term on their contracts haven’t been allowed to audition for NFL teams, putting the clamps on players like Calgary defensive back Tre Roberson, who has had to cancel a slew of December workouts.

The CFLPA has filed a grievance on the matter that won’t be heard until the new year. Hopefully with enough time for players presently blocked from NFL suitors to get their shots.

The new CBA was agreed upon last May, but its full implementation doesn’t occur until the 2020 season and some of the implications are significant.

The number of global players on each roster goes from one to two, the minimum salary across the league goes from $54,000 to $65,000, which is going to force some adjustments, and there will be a provision that allows teams to replace injured Canadian starters in-game with veteran Americans.

No one from either the CFL or the players’ association has been able to explain how that is going to be monitored and how the league can avoid being mired by controversy when a team benefits from an injury.

The overall impact of global players was minimal in most cases last season, with many teams hesitant put those players into meaningful situations.

The league acknowledges it needs to do a better job recruiting the best available talent from beyond North America, which is why it will embark in early 2020 on a series of combines in Europe, Japan and Mexico.

If Randy Ambrosie’s CFL 2.0 strategy is gain traction and lead to revenue, the quality of global players has to be better next season.

Just weeks after it appeared the stadium project in Halifax might be dead, the regional council voted to approve $20 million for the project, conditional on Schooner Sports and Entertainment finding a more preferable location.

With that significant step now completed, the group must work to secure that location and make a deal with the province for its share. If all goes well, there could be a final deal ready for approval in June, which would make the dream of a 10th CFL team a reality, ideally in time for the 2023 season.