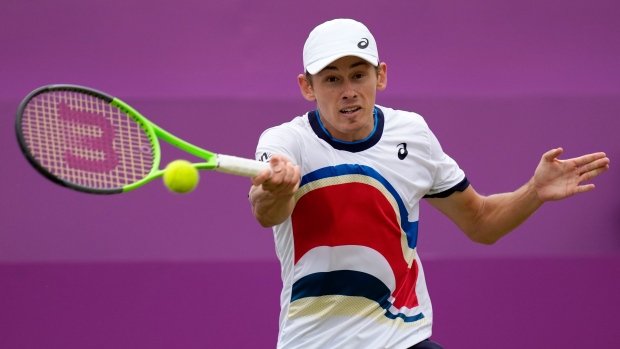 EASTBOURNE, England (AP) — Alex de Minaur and Lorenzo Sonego will meet for the title at the Eastbourne grass-court tournament after ending the runs of lucky losers Kwon Soon-woo and Max Purcell in the semifinals Friday.

De Minaur, who is ranked a career-high 18th, seeks his fifth ATP title and second of the season.

Sonego, an Italian ranked No. 27 and seeded No. 3 at the tuneup for Wimbledon, defeated Purcell 6-1, 3-6, 6-1 to reach his fourth career ATP final and second on grass.

By both appearing in the semifinals, Kwon and Purcell made Eastbourne the first tournament in ATP Tour history where more than one man who lost in qualifying made it that far at the same event. Lucky losers move into the main draw at a tournament when someone else withdraws.

Ostapenko reached her first WTA title match since winning the Luxembourg event in October 2019 by beating Elena Rybakina 6-4, 6-1 on Friday.

Kontaveit advanced when 75th-ranked qualifier Camila Giorgi stopped playing because of an injured left thigh while trailing 5-4 in the first set. Giorgi eliminated top-seeded Aryna Sabalenka in the quarterfinals.

It will be the ninth tour-level title for the 43rd-ranked Ostapenko, who is seeking her fourth title.

The 27th-ranked Kontaveit is 1-6 in WTA finals. Her only previous title came at a grass-court tournament in the Netherlands in 2017.