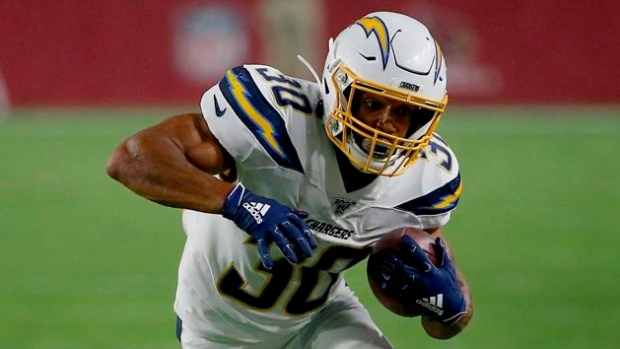 COSTA MESA, Calif. — As Melvin Gordon continues his holdout from the Los Angeles Chargers' training camp, Justin Jackson and Austin Ekeler are showing why they should be in the mix to get more carries this season.

Both running backs have made a strong impression on coaches during the three weeks of practices as well as last Thursday's preseason opener against Arizona.

They will figure prominently as Los Angeles hosts New Orleans for joint workouts Thursday and Friday and then a game Sunday.

"They've done a good job of taking advantage of their opportunities," offensive co-ordinator Ken Whisenhunt said. "I thought that they ran strong (last Thursday), made good decisions on their cuts and did a good job in protection. It was very nice to see the way they played."

Ekeler's role continues to expand as he enters his third season. The 5-foot-10, 200-pound Ekeler has emerged as a shifty change-of-pace back who is dangerous catching the ball out of the backfield. He is the first undrafted player in franchise history to have a rushing and receiving TD in each of his first two years.

Ekeler's six receiving touchdowns also make him the first undrafted running back with five or more in his first two years since Dallas' Dan Reeves in 1966.

Ekeler said he is still receiving the same amount of reps that he would get if Gordon was on the field. He said the biggest difference is that he is getting more with the first team.

Jackson was a seventh-round pick last year but missed most of training camp with a hamstring injury. He started the season on the practice squad before being called up to the active roster before Week 4.

When Gordon was out for four games with a knee injury, Jackson ended up getting his opportunity. He had an 18-yard touchdown at Pittsburgh and gained 58 yards with a TD in a start at Kansas City.

The 6-0, 199-pound Jackson showed how much growth he's had during the off-season on his touchdown against Arizona. He was able to lower his shoulders and powered through for the score.

Running backs coach Alfredo Roberts said that run showed the game isn't too big for him.

"We're both trying to carve out our space in this offence, especially with Melvin not being here," said Jackson. "We're trying to step up and work off each other. You have to plan for Austin's speed and my change of direction."

There aren't any signs that Gordon will end his holdout soon. He is in the final year of his rookie contract and is slated to earn $5.6 million this season. Gordon has gained over 1,200 yards from scrimmage and scored 10 or more touchdowns in three straight seasons.

Whisenhunt said he wouldn't be concerned if Jackson and Ekeler were his starting backfield if Gordon doesn't report in time for the Sept. 8 opener against Indianapolis. Whisenhunt also didn't want to say whether Gordon could report the week of the opener and be ready go.

"I don't know that scenario. Like I said, we miss Melvin," he said. "I think Melvin's a hell of a football player, but we're working with the guys that are here and they're doing a nice job."