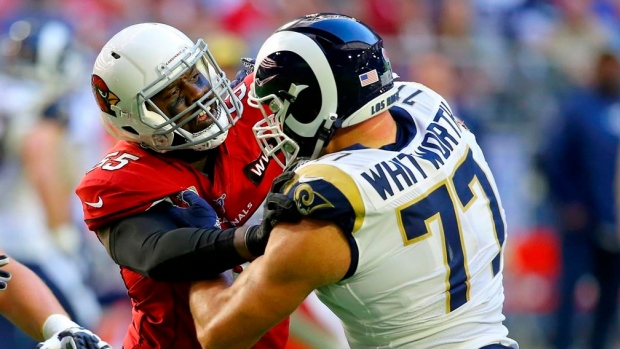 LOS ANGELES — If NFL teams are unable to hold off-season workouts amid the coronavirus pandemic, Andrew Whitworth and Austin Blythe believe continuity will be a valuable commodity this fall.

That's an area where the Los Angeles Rams' offensive line should be much stronger this season.

Whitworth and Blythe are both returning to their starting jobs on the line after re-signing with the Rams as free agents. Whitworth has been Los Angeles' starting left tackle for each of coach Sean McVay's three seasons, while Blythe has started at all three interior spots on the line over the past two years.

Injuries and turnover were key factors in the offensive line's less-than-stellar performance last season, but all five starters are returning this year. They expect to be tougher and more dependable and after spending much of last season frantically filling injury holes.

“I look forward to us having a fantastic rebound,” Whitworth said Thursday.

“Other guys had to step up and play, so having that experience is going to help us a lot coming into training camp,” Blythe said. “I think it will let us hit the ground running, even at the end of OTAs if we’re getting to go out there and do some football stuff. But if it happens to be training camp before we get on the field, that’s going to serve us really well.”

When the Rams hosted the Bears last November, they had four starters playing new positions on the offensive line, including Blythe moving to centre from right guard. Aside from Whitworth and Blythe, the Rams' other three starters against Chicago — Bobby Evans, David Edwards and Austin Corbett — had barely played in the NFL.

“A lot of these guys unfortunately didn’t to play a lot of football before they got thrust in there to play a lot of football,” Whitworth said. “Considering at one point we had three guys who had never played in an NFL football game starting, that’s a heck of a challenge. I don’t care where you are. I think there’s a lot to build off of. I think we have a lot of young guys that will step up and play well, and they’re going to grow up and mature."

The backups are mostly all back with a year of experience. Allen, Noteboom and right tackle Rob Havenstein also are returning to the Rams' offensive line, which will be blocking for a new running back.

Los Angeles released Todd Gurley last month to get out from under his onerous contract extension before it had even kicked in, leaving career backup Malcolm Brown and second-year pro Darrell Henderson as the Rams' top running backs.

Whitworth didn't sugarcoat the setback for the Rams' offence, saying Gurley will be missed in the locker room and on the field.

“He’s just somebody who’s infectious with his attitude, and really just his toughness and how much he loves football,” Whitworth said. “Guys just gravitate to him because of that."

Whitworth officially agreed to a three-year deal this week to return for his 15th NFL season, but he isn't thinking about his future beyond the current season. To that end, he built a weight room in his garage in California over the past month to make sure his training doesn't slip while he's unable to go to the Rams' training complex.

Whitworth knows he'll need every advantage to stay on top at 38 years old, and he started planning for this possibility well before North American sports had come to a standstill. Whitworth and his wife parked their cars in the driveway, and their four children helped with the cleanup and sterilization of the garage before he trucked in plenty of weights with help from the Rams.

“I was paying attention enough to realize things would be changing and be different,” Whitworth said. “I really started almost a month ago ordering equipment and stuff that I thought I might need, and now I’ve got a full-fledged weight room at the house. The only problem is she wants to know what in the world we’re going to do with all of it when things go back to normal. So I’ve got to figure that one out, but other than that, we’re good."