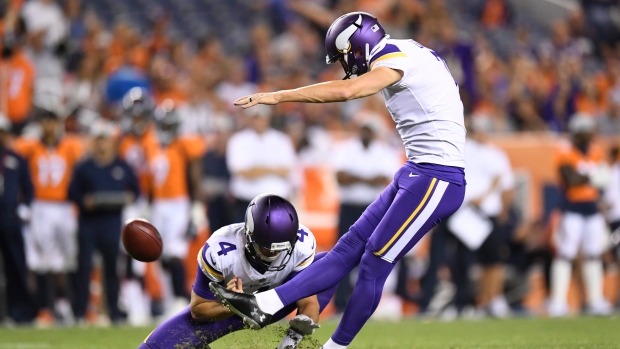 THOUSAND OAKS, Calif. — The Los Angeles Rams have signed veteran kicker Kai Forbath from the Chicago Bears' practice squad after a rocky start to the season for rookie Samuel Sloman.

Los Angeles drafted Sloman in the seventh round out of Miami of Ohio, but he has missed three of his 18 extra-point attempts this season, including a blocked try against the San Francisco 49ers last Sunday night in the Rams' 24-16 loss. Only Kansas City's Harrison Butker has missed more extra points this season.

Sloman also has missed two of his nine field-goal attempts, including a 29-yarder in the season opener, and coach Sean McVay hasn't always been happy with his kickoffs.

Forbath is a Los Angeles-area native who played at Sherman Oaks Notre Dame High School and UCLA. He kicked for six teams in his first eight seasons in the NFL.

He spent his first three seasons with Washington before moving to New Orleans, Minnesota, Jacksonville, New England and finally Dallas, where he made all 10 of his field-goal attempts last season. Forbath still lost his job in the off-season to longtime Rams kicker Greg Zuerlein.

Forbath has spent time this season on the practice squads of Carolina and Chicago.

Zuerlein left the Rams after eight seasons to sign with the Cowboys along with John Fassel, the Rams' former interim head coach and their longtime special teams co-ordinator. Zuerlein joined the Rams in St. Louis and was among the NFL's elite kickers after the franchise returned home to Los Angeles, although his effectiveness declined slightly last year.

Okoronkwo, a backup linebacker with eight tackles and one sack this season, has an elbow injury that requires surgery. He is likely to be sidelined for at least four weeks.