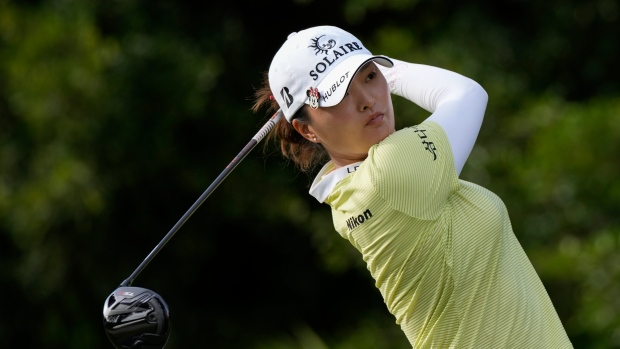 NAPLES, Fla. (AP) — Nelly Korda was watching from the tee box on the par-3 fifth hole as Jin Young Ko rolled in a birdie putt from 10 feet, the fourth of seventh straight birdies for the South Korean star.

Now their race to be No. 1 on the LPGA Tour goes all the way to the final round of the season.

Ko rode her stretch of seven straight birdies to a 6-under 66. Korda answered by overpowering the par 5s on the back nine at Tiburon for a 67. They were part of a four-way tie for the lead Saturday going into the final round, with nothing less than $1.5 million and LPGA player of the year on the line.

None of that seems to faze Korda, a 23-year-old American with an elegant swing who is ruthless when it comes to competing.

“It’s for other people,” Korda said of how the stage is set for the LPGA finale. “I’m just out there to do my job, taking a shot at a time, and see where it takes me. That’s all you can do.”

They were tied with Celine Boutier of France, who started with a four-shot lead and wasn’t hurt by her 72, and Nasa Hataoka of Japan who had the low round of a windblown Saturday at 64.

They were at 14-under 202, setting up a final day bursting with possibilities.

Gaby Lopez of Mexico was poised to join them until a wild finish. She hit into a hazard off the tee at the par-3 16th and took double bogey. She responded with a long eagle putt on the par-5 17th. And then her approach on the 18th went left and found water down a slope so severe she could barely find a spot to place the ball without it rolling away into the hazard.

Lopez did well to escape with bogey for a 69 and was one shot behind along with Mina Harigae, who made eagle on the 17th and shot 69.

A dozen players were separated by two shots, a group that includes Lexi Thompson, who took bogey on the last hole for a 68 and still was right in the mix.

Brooke Henderson of Smiths Falls, Ont., shot her second straight 70 and is nine strokes off the pace at 5 under.

The winner gets $1.5 million, the largest prize in women’s golf, and there’s even more at stake for the LPGA Tour’s two best players this year.

Korda and Ko each have four wins — one of those was a major for Korda, along with an Olympic gold medal that doesn’t count on the LPGA. Korda has a 10-point lead in the race for player of the year, meaning Ko likely would have to win to surpass her.

“I have to win because she plays really well right now,” Ko said.

Korda felt she was struggling and losing ground until two shots did the trick.

She went for the green on the par-5 14th into the wind. This was the same hole where Friday she leaked her fairway metal just inside the hazard and made bogey. The yardage was too good for her to ignore, and she hammered a 3-wood to about 10 feet, above the hole with a sharp right-to-left break, but it was an easy birdie.

And then on the par-5 17th with the wind at her back, she hit her biggest drive of the day that left her a 9-iron she hit to 4 feet for eagle.

“That eagle definitely helped,” she said.

Ko did her damage on the front, the first three of those birdies on tough holes into the 20 mph wind, rolling in putts from the 20-foot range and making it look easy.

She briefly had the lead as Boutier settled into a string of pars. Ko said she once made eighth birdies in a row at home in South Korea and was hoping to top that. But the streak ended with a careless three-putt bogey on the ninth, and she finished with nine pars.

Ko missed good chances at both par 5s, but she’s right where she hoped to be. Most impressive about her play is the South Korean star has been dealing with a nagging injury to the inside of her left wrist since May. It hurts mostly on a full swing with the driver, and she kept it at this week because it’s the last event of the year.

“I’m doing well right now and I got a lot of birdies today — yesterday, too,” Ko said. “So I hope tomorrow will be more birdies. We’ll see what happens.”