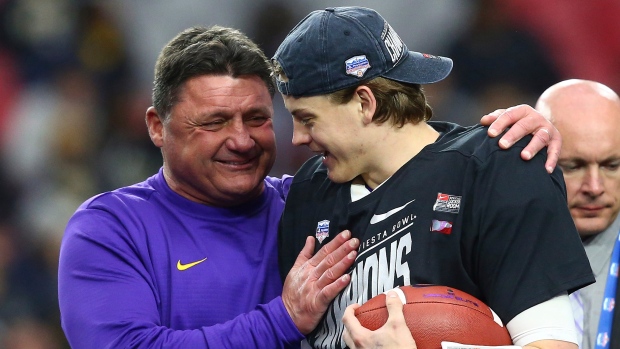 Ed Orgeron is in Baton Rouge for the long haul.

The national champion LSU Tigers announced on Friday that the program had agreed to a six-year, $42 million extension for its head coach.

The deal keeps the Larose, LA native with the team through 2026.

"Coach O has set a new standard at LSU," LSU athletic director Scott Woodward said in a statement. "He has proven that he is not only a championship coach, but also a leader of a program committed to doing things the right way. He has represented our institution and our state with great pride, on and off the field of play. He is well-deserving of this new contract, which should make clear our commitment to Coach O and the direction of our football program."

Orgeron heads into his sixth season at the helm of the Tigers, taking over the program midway through the 2016 season following the firing of Les Miles.

Under Orgeron, the Tigers are 40-9 and fresh off of winning the program's first national title since 2007.

"I'm very appreciative of Scott Woodward, the LSU board of supervisors and the state of Louisiana," Orgeron said in a statement. "I'm happy to represent LSU and this great state. My family and I are very grateful, and I look forward to working as hard as possible to continue to win championships at LSU."

Prior to joining the Tigers in 2015 as a defensive line coach, Orgeron served as head coach of Ole Miss and the interim head coach of Southern California.