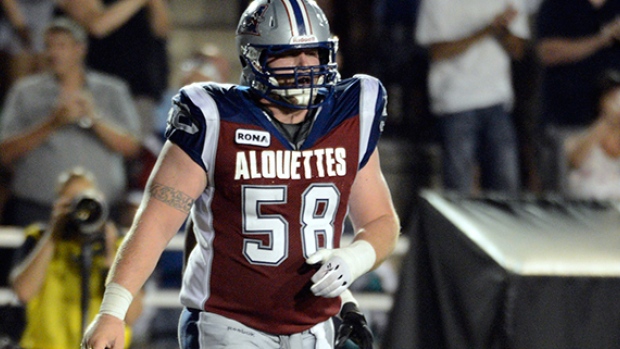 MONTREAL — Longtime Montreal Alouettes centre Luc Brodeur-Jourdain will retire after the team's home opener against the Hamilton Tiger-Cats on Thursday.

The team announced Monday the 36-year-old native of Saint-Hyacinthe, Que., will face the Ticats in the 168th and final game of his CFL career — all with the Alouettes.

The last pick of the 2008 CFL draft, Brodeur-Jourdain won two Grey Cups with the Als and was a two-time CFL East all-star.

"It's not an easy decision to make, but my role as a mentor over the past few seasons (has) made me realize that there is a life after my playing career and it’s time for me to see to it," the Laval product said in a statement.

"Obviously, Thursday’s game will be emotional for me, but I could not ask for a better scenario as I will be able to play my last game in front of our fans. Not every player has the luxury of knowing that they will jump on the field one last time."

The Alouettes (0-2) also announced they have signed Canadian kicker Tyler Crapigna to the practice roster.

Boris Bede has been handling kicking and punting duties for the Alouettes this season.