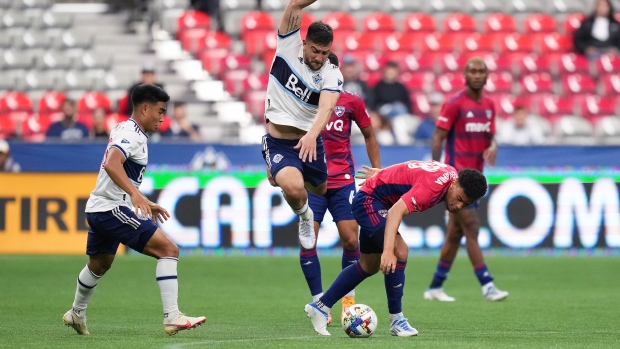 VANCOUVER — The Vancouver Whitecaps are quickly cementing their status as a second-half team.

Tied 1-1 heading into extra time against FC Dallas, centreback Ranko Veselinovic – who had pushed forward in attack – was brought down for the penalty in the 92nd minute.

Striker Lucas Cavallini stepped up, and despite his own admitted up-and-down history with penalty kicks, buried the chance to seal the 2-1 win and claim his third goal of the season.

The Whitecaps came into the match having scored in the dying minutes of a 3-3 draw with the San Jose Earthquakes capping a different second-half comeback.

Vancouver won its match-up against Toronto FC in similar fashion, with Tosaint Ricketts scoring in the 90th minute.

“We managed to find that attitude to keep going to the end,” Cavallini said about Wednesday’s result. “We didn’t have that at the start of the season.”

“It’s our fourth game in 10 days and in the second half we destroyed them. It's a huge credit to our fitness and medical department,” he said. “It shows the resiliency of the team and how good we are mentally and physically.”

Brian White had tied the match in the 71st minute, rising to meet a cross from Cristian Gutierrez and sending the ball past Maurer.

Paul Arriola opened the scoring with his fourth goal of the season in the first half.

The Whitecaps were caught on the counterattack in the third minute of added time as FC Dallas (6-2-4) leading scorer Jesus Ferreira slid a pass to Arriola. The midfielder took a touch before firing it through the onrushing Cody Cropper’s legs.

The Whitecaps chased in the second half with winger Ryan Raposo making way for striker White as Vancouver looked to unsettle Dallas’ backline.

White’s goal sparked a flurry of chances from Vancouver, with the best falling to Cristian Dajome who found himself free on the edge of the six-yard box but fired just wide of the post.

Despite FC Dallas coming in on the back of a nine-game unbeaten streak, and the Whitecaps on a similar three-game streak, both teams struggled to generate much offensive threat in the opening 15 minutes.

Cavallini threatened the most for the ‘Caps in the first half, pouncing on a defensive miscue in the opening minutes only to see his shot saved.

The Whitecaps came into the match having scored in the dying minutes of a 3-3 draw with the San Jose Earthquakes courtesy of centreback Erik Godoy.

For Dallas, it was continued success along the west coast following wins against Los Angeles and Seattle.

Vancouver’s four-match homestand comes to an end as the club heads to North Carolina to take on Charlotte FC.

Dallas is next in action against Minnesota United FC in Texas.

This report by The Canadian Press was first published May, 18, 2022.